Share All sharing options for: PP #3: The Chicago Bulls

Well, that was really something.

What’s up guys, haven’t posted any PPs for awhile because of the whole trade deadline ruckus; I wanted to wait until the smoke cleared a little before I started posting silly shit about things that hardly matter (basketball games). But the deadline has come and gone, and I’m back on my grizzy, so let’s analyze the last two games!

What’s that you say? The Knicks only actually played one opponent in the past week? Well then, don’t mind if I only analyze one play from the two-game collective ungulate rape that was this past week.

Let’s get into it.

The Chicago Bulls run startlingly similar plays to the Sacramento Kings, often running the "Give the ball to Tyreke Evans," only with Derrick Rose this time. We’ll call it the "TE2," for concision’s sake. The TE2, which I now realize sounds a lot like a character from an Arnold Schwarzenegger movie, is boring as shit and played out (see what I did there?), so I’m going to pick something else. But picking something else wouldn’t be good enough. In direct spite of Derrick Rose, I’m going to pick an isolation play starring Kirk Hinrich, the NBA’s premier Lucifer impersonator. The play dictates that Hinrich gets into the teeth of the defense, causing collapse, and passes the ball to a man whose defender was previously picked out of the play for an easy lay-up.

Let’s translate it into Knickerbockerdom. 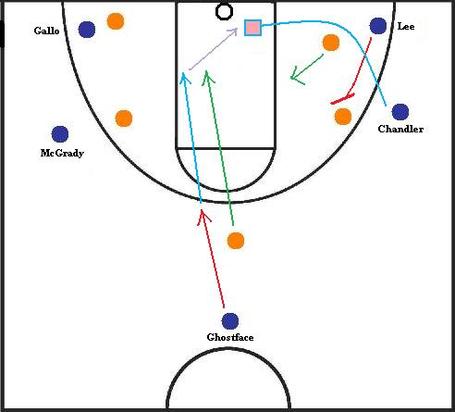 I chose to run Ghostface at point for this play simply because I have not seen Sergio Rodriguez run ball in about a year, so I forget what he looks like on the drive. Aesthetically, Sergio would run point in this particular play to greatly increase the odds of it ending in an alley-oop, but I put Ghost in anyway because Sergio has yet to play a game in a Knicks uniform.

The formation is that of typical end-of-quarter iso; one man isolated slightly in front of mid-court, his teammates spread out along the arc to space the defenders and make the paint more conducive to the drive.

First action, Ghostface begins to creep up, real panther-like, to the 3-point line as the red line indicates, while David Lee drags his ass over (other red line) from the corner to pick Wilson Chandler’s defender, whose eyes should be on Ghosty’s majestic panther imitation. As Ghost creeps up to the left, he should have his peripherals aimed on David Lee’s pick (pause?). When he sees that Lee’s pick is in place, he should explode (pause) toward the rim and totally collapse the defense. As this happens, should begin his travel around the pick Lee set for him, and then cut to the rim along the baseline unimpeded.

Once Ghostface gets far enough to the hoop, he should do one of two things (each is represented by the periwinkle line):

- This play can be run to either side. The reason I chose to have Ghostface drive left is the same reason Billy Madison colored the duck blue.

- I heavily emphasized in my last post the importance of setting solid picks. The reason I did not do the same thing here in reference to David Lee's pick is because I assume David reads everything written here at P&T, so he already knows how valuable a solid pick is. I'm watching every pick, David, I want to see some fucking effort.

- We acquired a 23 year old talented point guard yesterday ripe for lampooning. I feel like no one's fully recognized how significant Sergio Rodriguez could be to this team, even if it's just for the short-term. Let's all reflect on how silly that son of a bitch is for a second. Okay? Okay. Alright. Word. Good. Sweet. Nice. Excellent. Word^2.

So there you have it guyz. Gimme some input and maybe some money, if you have any to spare.