Playbook Pilfering #4: The Streaking Wilson and You

Share All sharing options for: Playbook Pilfering #4: The Streaking Wilson and You

It’s been such a long time! I’ve got another edition of Playbook Pilfering for everyone, although I feel obligated to give a disclaimer: I have not pilfered this play, in the traditional sense of the word, for it is from Mike D’Antoni’s playbook! I was watching the first half of the Knicks-Grizz game last night and the end of the first quarter featured a play that tickled me to the point of physical reaction. The play, which prominently features Wilson Chandler, David Lee and, to a lesser extent, Eddie House, is the first and only time I’ve ever seen a player post his defender by sealing him in front 20 feet from the basket. This is difficult to describe, but imagine a player fronting another player in the post for ball-denial, then getting burned. Now take that situation, move it out 15 feet, make the posting player a small-forward, and you have what I like to call the "Streaking Wilson Pause."

I learned in scene-setting class that I should begin by setting the scene.

The Knicks just stopped the Grizzlies on defense (I know, I know), and had 23 seconds to run the clock down and get the last shot of the first quarter. They had Edward L. House II bring the ball up the court and let the clock tick until about 10 seconds remained. The following ill illustration illustriously illustrates the position at which the Knicks start. The players on the floor at the time other than House were: , Lee, Harrington and Walker. They set up as such: 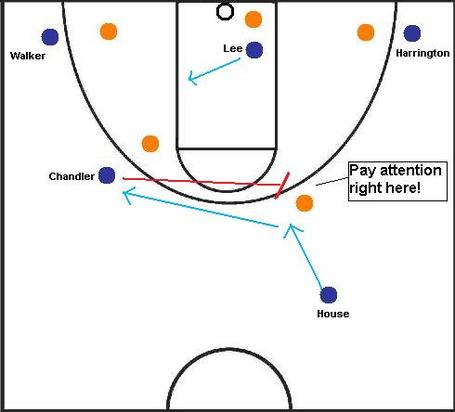 With 10 seconds remaining, creeps panther-like to set a screen on House’s defender while House squirts over to essentially switch places with . The defenders will switch assignments due in large part to House’s shooting prowess. When the defenders switch, does not roll off his man, rather he posts him, as explained in the introduction to this PP. He seals his man all the way back at the 3-point line, not allowing him to get in the way of the rim. This doesn’t matter for another 2 seconds or so, so it is absolutely crucial for to hold his man off.

While House is making his way over to Chandler’s former spot and Chandler is wrastlin’ for position with his soon-to-be chump defender, David Lee should jog his white ass up almost to the free-throw line to catch an entry pass from House. As House releases the ball, should release his man (pause) and sprint in earnest to the Rim. David Lee will catch the pass and hold onto it for less than one second before hitting the streaking pause in stride with a difficult bounce pass for an explosive, quarter-ending statement-making dunk. 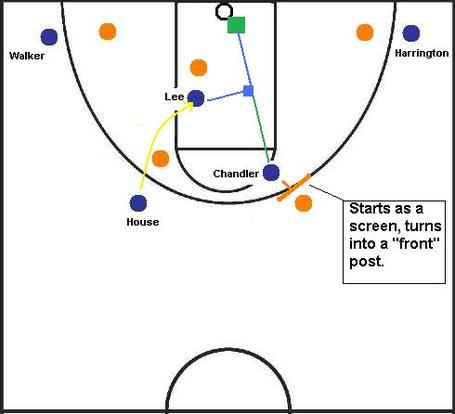 The keys to this play are ’s ability to seal his man and David Lee’s pass. Although the former is more difficult, the play was botched in the Grizzlies game because of the latter. did an incredible job sealing his chump-ass man, but David Lee attempted to give the ball without bouncing it and it ran smack into the hand of ’s defender. True, the defender made a great play on the ball, but he shouldn’t have had the opportunity to do so, and a bounce-pass would eliminate said opportunity.

Proper execution of the Streaking Wilson Pause would result in an easy bucket and an emotional charge for the crowd, like essentially all Playbook Pilfering plays. The different with this one is that it is so cool to watch. I wish I could show you fellas video of the play (I also wish it had worked), but alas! I have to settle for MS Paint. But I have to ask anyone who has access to this game via League Pass Broadband to go back to the end of the first quarter to behold the beauty of the Mike D’Antoni offensive scheme.

- Bill Walker is a game-changer for those of us who have been subjected to overweight slobs such as Eddy Curry, Zach Randolph, over-the-hill Steve Francis, Jerome James, etc. In concert with Sergio Rodriguez, Wilson Chandler, Eddie House and Al Harrington (which was an actual line-up in last night’s tilt), Bill walker is a sprinting proximity mine. If Coach continues to let him spin, keep an eye on him. He will kill someone with a dunk by the end of the season.

- I know Olympic hockey is over now, but did anyone else notice that prominently featured two players whose last names are "Crosby" and "Nash"? See where I’m going with this?

- Welcome all new P&Ters! I think it’s grand that so many new people are joining and contributing to the poop-based community that has been established over the last few years. However, I’m not sure I agree with those who join SBN simply (no pun intended) to attempt to start an argument.

- Does anyone know when it’s going to stop snowing?

- Apparently, Jim Halpert from "The Office" is auditioning for the part of Captain in the upcoming film.

As always, thanks for reading and expect an article sometime this week addressing Chris Bosh. It’s been a great Black History Month this year, everybody; let’s keep it up for Women’s History Month!