Hey what’s up guys?
Starting now, I’ll be a new author for Posting & Toasting, which brings the grand total to two. I have been following both the Knicks and P&T since 1914 and consider myself fortunate for the opportunity to share my thoughts on everything from Knickerbockers to farts with all my fellow fanatics. A lot of you ladies are probably familiar with my writing style and mock analysis from my former nickname "solanumbrella," and I’ll continue the trend without fail, hopefully to everyone’s delight. I plan to write stuff up relatively frequently, so it’s up to you to let me know if you want any topics covered or if you have any suggestions for me. Like I said before, I’m pretty pumped for this opportunity and to have a forum for talking shit, and thanks in advance to everybody for reading.

A couple things about myself:
I am 20 years old and I currently attend The University of Scranton in Scranton, PA. I major in public relations and frequently dream of running the PR department for Madison Square Garden. I hate snow. My favorite sports teams are The Knicks, The Yankees and The Giants in that order. I watch and play entirely too much basketball, but I am far better at watching than I am at playing pause. I have a blog called Big Giant Orange; it sucks compared to this one. My favorite food is anything with a spicy sauce. I listen to a lot of different music, but my favorite is rap and hardcore, as well as any love song. My favorite current athlete is Renaldo Balkman, but the all-time honor goes to Lawrence Taylor. I desperately want the Knicks to get better and will throw a huge party when they do. You’re all invited.

One of the ideas I had for an article is to take a page out of the playbook of our adversaries, depending on who the Knicks are playing, and to analyze how it would work if Coach Pringles were to run it.

The first play I chose is a backscreen that is run by the Cleveland Cavaliers (seems almost oxymoronic to talk about any "plays" the Cavs may have, considering their knack for giving the ball to LeBron and getting the fuck out of the way). This play features James starting with the ball on the left wing. At the top of the key, also at the 3-point line, is Daniel Gibson, who is the beneficiary of this particular play. In the corners stand Jamario Moon or Delonte West, or really any other shooters on the floor at the time, while Zydrunas Ilgauskas battles for low-post position. The first major action of the play dictates the player in the corner to LeBron’s left come over to set a screen on James’s man, giving LeBron an open lane to drive left and drawing the attention of the defenders in his surrounding area. As he begins his drive, Ilgauskas drifts up toward the top of the key and sets a screen behind the man guarding Daniel Gibson at the 3-point line. Gibson immediately runs over to a spot on the 3-point line approximately 10 feet to the right of where he was just standing, running his defender directly into Ilgauskas. LeBron sees the defenders collapse on him and makes the slightly difficult pass over to Gibson for the open tray-banger from the right wing.
This play would work beautifully with the Knicks staff, especially Nate and Gallo. As you could see from the diagram (green lines-first actions, red lines-second actions, yellow lines-pass, blue square-shot), Nate would act LeBron’s part and Gallo would be Daniel Gibson. Lee would come up to set the pick while Harrington and Chandler inhabit the corners. 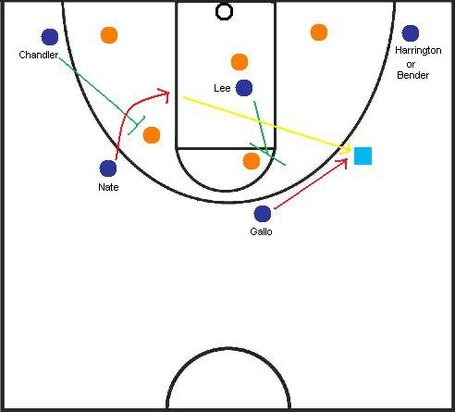 As you may be able to tell, I'm an absolute technician with MS Paint.

The beauty of this play is its simplicity as well as the options it opens up. If Gallo gets the ball and he’s open, he shoots the three. If Harrington’s man closes out on Gallo, he swings the ball to Al, who shoots the three. If Chandler’s defender falls asleep, he can cut backdoor and Gallo can fire him a pass for an easy lay-up. The possibilities are endless!
The play relies heavily on the ball handler’s ability to drive, as there is a direct correlation between the defensive attention he receives and the shooter’s defender falling asleep enough not to realize there is a pick being set behind him. This is the reason the play works so beautifully for the Cavaliers; LeBron James gets more attention for his drive than arguably anyone in the league. It’s also the reason I feel Nate would best represent LeBron in this scenario. His ability to drive to the cup is unsurpassed on the Knicks (you could try to argue Wilson Chandler, but I would both disagree and add that Wilson’s passing ability is not up to snuff for a play like this), and he would draw attention by the defense depending on what type of game he was already having. This is a fourth-quarter play; the Cavaliers usually run it after a big defensive stop and need a back-breaking three to rile up the crowd and force a time out. We could and should do the same.

Let me know what you guys think. Thanks for reading.