I got me a pretty substantial basketboner for this guy. Thanks to viva_morrison for another excellent profile. -Seth 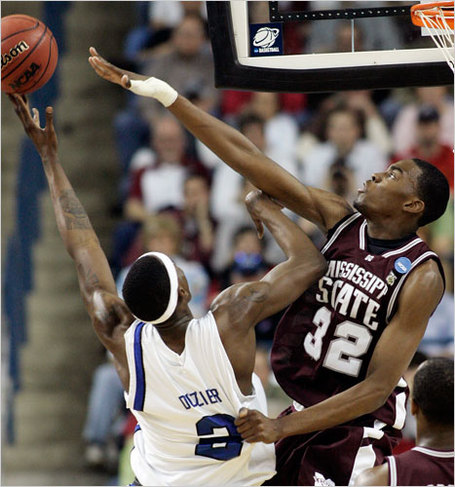 What's good, everyone? I'll keep the trend of big men going with another prospect. Class, I would like to introduce you all to Jarvis Varnado. Jarvis is from Mississippi State, and he really likes defense. NBA Draft.net has him going to us with our 38th pick. Before we learn a little more about this cat, let's admire the above picture. It is something that we haven't seen in quite some time. Jump time.

And just because it is so much cooler with sound:

There you have it. I think this kid's stock is going to rise considerably by the time the draft comes around, because defensive talents like this don't come around too often. He is the kind of player I want on my team. His offensive game will come around, and it sounds like this is a kid that wants to improve that part of his game. There is no telling how much more weight he could add on to his thin frame, but that didn't stop him from being effective against good SEC play. I would love to have a guy like this coming off the bench. What do you guys think?