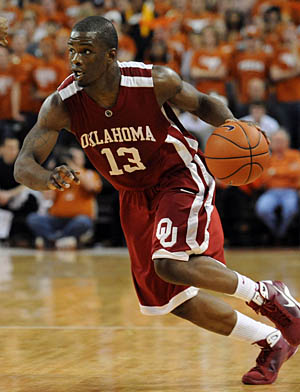 I am really starting to like writing up these prospect profiles. I am going back to the small guys with somebody that a bunch of you have been talking about. Willie Warren, a very talented guard out of Oklahoma. I learned a lot about this guy when I was looking him up, a lot of things I was unaware of. Let's get informed after the jump.

"I'm tired of trying to figure him out."

"Why in the world is acting like a punk? I can't stand it anymore."

Only one of those quotes is fake. His poor performances in losses led to Capel benching Warren for a game early in the season, and it is clear that Warren was struggling with being "the man" for this Sooners team. Some of his stat lines are just bizarre: 8 points, 5 assists, 6 TO, 0-8 from 3 in a loss to VCU; 4 points in a one-point win over Northern Colorado; 9 points and 0-6 from downtown in a win vs. Centenary, 27,8, and 4 in an OT win vs Utah. The guy was all over the map.

And what he can do aside from dunking:

Things to take away:

Willie Warren is an extremely intriguing prospect. Some mocks have him in the mid-late first round, while others have him going in the early second. I think he has too much talent to drop down to where the Knicks are, and I don't know if I would trade into the first round to get him considering our glaring need for interior players. If he did fall, I think it would be foolish to pass him up. His sophomore season seems like it was an anomaly, and a perfect storm of factors contributed to one very hellish season. I think his worst days are behind him, and he could be a very nice player for us. Your thoughts?