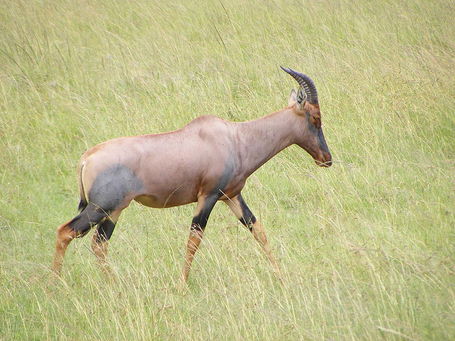 Good afternoon, babies. Surely, you've been all over the internet reading rumors and opinions on the destinations of various free agents. I'm here to regurgitate some of those, perhaps pass along some articles you haven't yet read, and touch on some other Knicks links. Let's get to it.

- First of all, it's worth mentioning that male topi antelopes have been known to emit false alarm snorts, luring in female mates by signaling the presence of a nonexistent predator. Just saying.

More after the jump.

- Second of all, the beloved and ever ridiculous Scott Schroeder has been hard at work piecing together the Summer League rosters of every NBA team. Two previously unknown names mentioned with the Knicks: Jaycee Carroll and Leo Lyons. No Skita yet, I'm sorry to say.

- You know the "Knicks Night Live" thing that MSG's doing? 3 fans get to spend a night at the Garden while MSG does an all-night special on free agency? Well, one of P&T's own done won the contest. Congrats to commenter "Adam NYC", who assures me he'll report back from the event.

So you still wanna talk about free agency? Well, fine. Here are some items of value that I read today:

- Joey's take on all of this (Previously linked by stingy. Thanks stingy!) is harrowing and doesn't fit my mindset at all, but it's typically well-written and insightful.

- Matt Moore in a new CBS gig (congrats, Matt!) on the importance of coaching in each of the free agent destinations.

- Marc Stein's like "forget coaches. How 'bout them owners?" This one doesn't bode well for the Knicks, I'd imagine.

- Frank Isola's like "owners and coaches? What about Allan Houston!?"

- If push comes to shove, Dan L would rather poach from other teams via trade instead of overpaying free agents. These are certainly viable possibilities.

- I know a lot of you don't subscribe to Alan Hahn's blog, but his most recent posts on New York's intimidation factor and the potential of free agents using the Knicks as a decoy are superb.

- Sam Amico's neighborly snooping is my second-favorite L-Word piece of the day.

- Trey Kerby's drawing and quartering of the L-Word is obviously my favorite. It also underscores just how ridiculous all this hooplah is. Remember that nothing is official until July 8th. Almost everything that seems certain now will be turned on its ear by tomorrow.

Meanwhile, Jerome Jordan isn't officially a Knick yet, but the word is that it's still a sure thing. When it becomes official, we will have an over-the-top celebration. Enjoy your evenings, everybody.