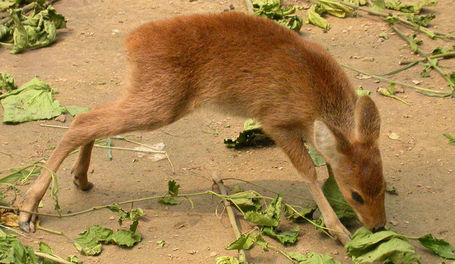 Hello, rugrats. I hope everybody's day is going swimmingly. If you'd like, I've got some links to offer as an accompaniment to your lunch or mid-day chanting or whatever is you're up to right now. Have a look:

- First of all, I'd like to remind all of you that the SBN New York bonanza is tomorrow night. It'll be a great opportunity for me to molest meet some of you guys and for y'all to meet one another. I encourage any of you who can make it to RSVP and stop by. Here are a few more details to entice you:

Honestly, if you don't want to pound Watermelon-tinis and chicken fingers with fellow Knicks fans, then something is gravely wrong with you.

- Whatchoo know about chinese water deer, huh? These little fuckers are incredible. They're totally normal, mellow deers, except for the fact that they've got fangs, y'all. FANGS.

- Don't read this. It's good work, but seriously, don't read it.

- A very nice piece in the Post on Brian Zoubek, who worked out for the Knicks on Monday.

- Meanwhile, the other Post folks are busy bothering the Lakers while they're trying to win a championship.

- As is to be expected, seats are already filling up for the '10-'11 campaign. Who knew the possibility of a Quincy Douby signing could spark so much interest?

- Clyde Haberman of the Times thinks New York might as well try and thieve all of Cleveland's stars. Even Bieber.

In the world of pop music, the city could go all out to persuade Justin Bieber to relocate here. He’s a 16-year-old singer, the latest teen/tween heartthrob. He was born in Canada and lives in Atlanta. On Friday, something like 12,000 screaming girls filled Rockefeller Center to see a free Justin show. Move him to New York, charge hefty prices for his performances, and he could be a gold mine for the city — until the next teen idol comes along, anyway.

Hell, why doesn't every meaningful human being work from New York? Among others, Halberman makes a pretty good case for the Dalai Lama. What kind of bush league supporting cast do they have for him in India, anyway? A bunch of monks?

That's pretty much all I've got for y'all today. Have a splendid afternoon and evening, and I'll hopefully see you tomorrow.