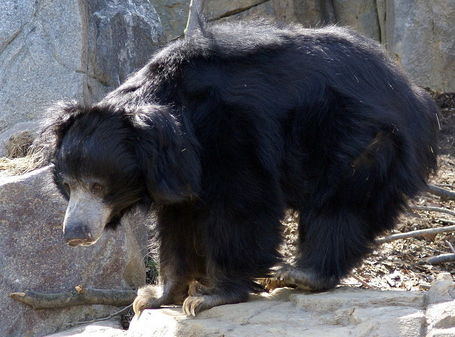 Good morning, constituents. I've quite a bit to share before I leave for the morning, so let's get right into it. After the jump, peep these links:

- Sloth bears are apparently called such because they were once thought to be sloths. The same, I'm told, goes for former Knick, Jackie Butler.

- Via an early-morning Fanpost by Dutchmarau, Amar'e Stoudemire isn't a sure thing for the upcoming World Championships. Stoudemire's Knicks contract, everyone tells us, is uninsured. Now, it seems, the company that presides over these matters is hesitant to insure him for international play, which means he might have to sit out entirely. More on that one as it develops.

- In case you were wondering, here's confirmation that Eddy Curry did not, in fact, ever show up at Summer League in Las Vegas. He wasn't required to do so by any means, but it would've been a nice gesture, since he's been a bit, um, aloof this summer.

- Our friend Keith at Knicks Journal conducted a very nice interview with the incredibly affable Ronny Turiaf. Here's a selection:

Q: You just spent part of your summer in South Africa with Boris. What were you guys doing there?

A: Boris and I decided to take a month-long vacation. It was something I needed after an NBA season that was hard on me mentally, physically, and emotionally. I took time off—went on a Safari for two weeks. After that, we traveled to Northern Africa. We worked with the local youth basketball clubs.

Seeing the type of conditions that these kids are practicing under proved to be a real awakening for me. You should have seen the faces of all the kids as I gave out shirts, shoes, basketballs, etc. It was very rewarding to see the happiness on everybody’s faces that I visited.

"He's a multi-position player that has a world of talent whose athleticism is off the charts. He's only played two years in the league and just turned 21. There's a lot of positives and we'll figure out where we fit him in, and figure out what the best position is for him, but he can play a lot of places. "

I mentioned this before, but when I heard Phil Weber get asked about Randolph, he said simply, "I'm drooling".

- Weber also has confidence in Stoudemire playing without Steve Nash. Despite his propensity to murder people naked with his bare hands, Weber's a pretty positive fellow.

- You really want to start talking about free agency again? After what we just put up with? Really? Well, fine. Here you go.

- This season has the potential to be a huge one for Raymond Felton.

- Tommy Dee links to this ESPN thing where you type in your salary and they rub it in your face that LeBron James makes more money than you do. I typed "fuck you, computer" in the salary box. It didn't really understand. Me 1, Gloating Computer 0. I kind of feel sorry for the thing.

- We heard murmurs that David Lee had hauled ass back to New York to attend an MSG security guard's funeral, and Harvey Araton has the full report. Lee, lest we forget, is as upstanding a citizen as has ever worn a Knick uniform.

This current team, this 2010 edition seems special. Gallinari the Italian Knick, has in two years proven to be one of the top shooters in the NBA. It is no accident his nickname is "The Rooster," an inference to his cockiness. The new aquisitions are long on edge. Turiaf, the Frenchman is a veteran willing to dispatch his limbs in the path of those bold enough to speed into his paint. Mozgov, the seven foot one Russian, has displayed a fire and flamboyance, a desire to dunk and block shots. And the Jamacian Jerome Jordan, a seven foot draftee joins him. Anthony Randolph, the German born player, is the simply the second coming of Marcus Camby, an uncanny dunker who posesses a jump shot that at his height is matched only by Kevin Durant. Azibuke, the Londoner, is smooth, among the best shooter/slasher the Knicks have had in a decade. The Canadian, draftee Andy Rautins, a coaches son, and a three point arsonist, who at Syracuse, played his college home games at Madison Square Garden.

Splendid. Enjoy your days, everybody.