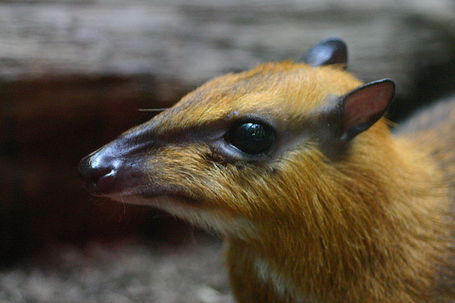 Morning, marmadukes. You want have some links? Here you go are the links.

Have a jumping for those link!

- Chevrotains are just very, very tiny deer. Mouse deer, you might say. There are many different kinds. Do I want one? Yes, I want one.

- As of last night, I am officially hesitant to grow too attached to any of the Knicks' recent acquisitions. However, this Bethlehem Shoals piece at The Awl makes it very hard not to feel like Anthony Randolph is a prophet of some sort. A selection:

Randolph is the quintessential NBA cult figure: lost, found, and pitied back into oblivion several times over after only two seasons in the league. As a player, his skills are limitless. Coach Mike D’Antoni talks about the twenty-two year-old like Weapon X; if Amar’e is like a volcanic eruption around the basket, and Gallo a tall, hot-and-cool international emissary, Randolph is several thousands theories of basketball colliding in the same place at the same time. He’s a 6’11" gawky slingshot of a player born on the wrong side of the Berlin Wall, drafted out of LSU in 2008 after one inconclusive year, and projected as a raw, bouncy beanpole. Instead, within weeks he revealed that he could pass, handle, and terrify all manner of opponents with his shot-blocking and speed-demon response time.

- Speaking of which, if you'd like to discuss the potential of a Chris Paul deal, Alan Hahn's comprehensive blog post is a pretty nice primer on the situation. It'll cost ya, though. A sampling:

There's a reason why the team made the moves they did this summer after giving a $100M commitment to Stoudemire, the plan went back to preserving cap space and maintaining flexibility for the future. The David Lee trade yielded three quality players, one or two which could be viewed as assets or, possibly, players who could make others already on the roster (read: Wilson Chandler) more expendable.

- The Knicks are fresh out of season tickets, which is mostly a good thing. (Regarding that headline, every time I see or hear the word "blitz" out of its usual contexts, my brain's all like "Are you ready, Steve? Andy? Mick? Alright, fellas. LET'S GOOOOO!", and then I smear lipstick all over my face and start flipping over furniture.)

- Steve Adamek reminds us that Dell Demps, who was just hired by the Hornets, discovered Jackie Butler, one of my top-five favorite all-time Knicks.

- Mike Kurylo shoots down the "resign T-Mac!" idea with a machine gun made of math.

- Last but not least, I went on the inaugural episode of the "Ballin' with Bryan" podcast earlier in the week. It is available for listening and downloading here. We did not, in fact, "ball", but we did talk about the Knicks. I show up at the 30-something minute mark.

Have excellent days, friends. If you see any chevrotains, tell them I say hi.