What the Knicks gained and potentially lost with Amar'e Stoudemire

Share All sharing options for: What the Knicks gained and potentially lost with Amar'e Stoudemire

For two years the question was "Will the Knicks get [him]?" For two years. All of a sudden, over the past few weeks, it shifted to "WIll the Knicks get shut out?" Some of us were able to get over ourselves and realize It was a fair question what with the pieces the Bulls have in place, with Miami trimming more fat, and with some billionaire's unfamiliar, though intoxicating, energy next door.

We have an answer now, though, in the form of Amar'e Stoudemire. For $100 million, the Knicks answered with an athletic monster of a man that this franchise has never seen on a nightly basis. A man that played over everyone's head, almost literally, the second he got some assurance in Phoenix about his future. The same assurance he just received from the Knicks.

But answering that question leads to others. Questions about rebounding and defense that the Knicks have enough problems solving. So let's look at the new power forward compared to the other three available in Chris Bosh, Carlos Boozer and David Lee.

Now Osborn dropped his own thoughts on the Elite 4 months ago, and Tom Ziller examined where Bosh ranks among the era's best power forwards at the age of 25. But I'd like to swagger jack revisit the topic because it isn't just speculation anymore. It's real. It's damn real.

Using last season's totals, let's look at the big man skills we constantly debate about at P&T: scoring, rebounding and passing ability. I won't speak about his defense, partly because it's difficult to measure, partly because I have in the past, but mainly because Matt Moore just did and Amar'e stacks up favorably.

First up is scoring ability measured by points scored per 40 minutes and True Shooting percentage (which factors in free throw and three point shooting). The graph shows how frequently a player scores vs that player's efficiency when doing so. 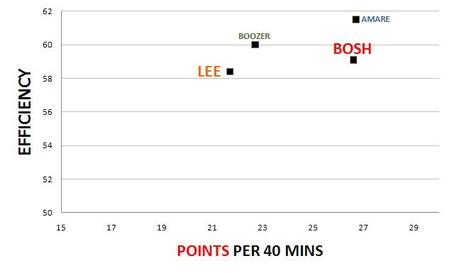 Stoudemire simply outclasses everyone in this department.  He racks up 26.7 points/40 while shooting a better percentage. He's a dominant pick and roll player coming to an offense dominated by pick and roll sets. Lee's the worst of the bunch, and though his expanding offensive game should be noted (like his jumper), Stoudemire is already on that island sipping Mai Tai's (and shooting 42% from 16-23 feet, just a shade under Lee's 43%).

But what about rebounding? That's where someone like Lee would surely be missed. His grit and nose for the ball aren't replaceable. Plus, did you SEE the Western Conference Finals? 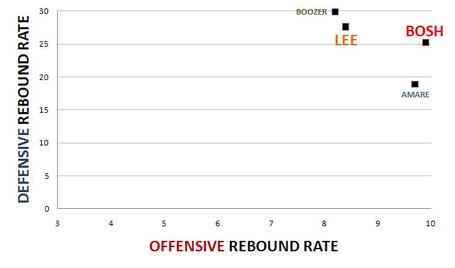 The numbers confirm what we already knew. Amar'e has a poor total rebounding rate (percentage of available rebounds obtained by a player while he's on the court) compared to the others. He's easily the worst defensive rebounder of the bunch and averages about two less total rebounds per 40. Boozer's the best of the four but I don't think we're going to argue over who we'd rather have between the two.

And a point we like to talk about. We love Lee's passing ability. It's where he sets himself apart - why we want him to stay. 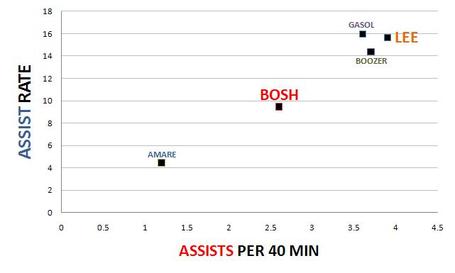 The assist rate (percentage of team's assists a player gets while he's on the floor) certainly supports the argument for Lee. There he is with better numbers than the other three free agents. I added Pau Gasol cause he's considered by many as the best passing big around and wanted to show how comparable Lee's stats were. Boozer may be a surprise but with the amount of movement and cutting the Jazz run, he gets plenty of interior assists. Bosh is somewhere in the middle, not great but certainly not incapable. And then there's Stoudemire looking up at everyone else, though it's worth noting that last season's totals were the worst of his career.

Is this necessarily a bad thing? After looking at Stoudemire's scoring ability, do we want him to give the ball up? Is this more a product of Steve Nash running the offense instead of, say, Chris Duhon? Are an extra four assists a game enough to not want Amar'e? Of course not. But where do the Knicks make that up? And about that rebounding?

More questions indeed. But what Donnie Walsh did was sign the most elite scoring big man in the league and added him to a team that struggles to score without the three-ball. It's a huge splash and Stoudemire is a sexy name, one that will perhaps convince others to come with him. Still, Walsh has more holes to fill. Thank goodness he's positioned the team to have enough flexibility to help answer them.