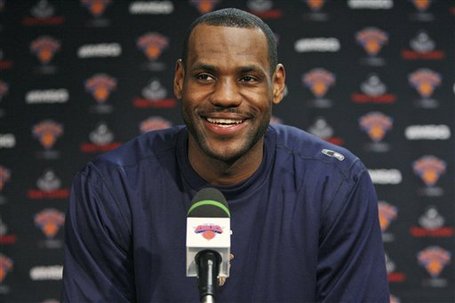 Lets hope this is what we see come Thursday night

Chris Broussard just reported that LBJ has requested a time slot Thursday night at 9pm to announce his decision and it has been granted. Broussard says and I quote " The Knicks are very much alive. Do not be surprised if he comes to the Knicks" Things can be looking up for us Knick fans. Be ready to tune in on Thursday night at 9pm on ESPN. This is not a cruel joke, hear me, this is real. This is what we have been waiting for, for 2 years! Lets hope we get good news on Thursday boys. We deserve it. Broussard looks psychically and emotionally hurt. Not only when he said we are very much alive but throughout the entire report he didn't look excited what so ever. I don't know whats up with Chris but he looks off.

Here is a few conspiracy theories flying around out there.

Also Carmelo Anthony and his wife are getting married here in New York sometime soon and Lebron has been rumored to be expected to attend. This places him in New York and some may seem to think that this may be the first thing on Lebron's To Do List in New York after becoming a Knick.

Spike Lee has been acting weird lately. Personally I'm not sure if he knows something but the fact that he answered back to back questions regarding the free agency with the same statement "I cant speak on it until after the free agents sign" does raise an eyebrow.

Did Lebron make his decision based on New York agreeing to terms with Amar'e? Possibly so. We are the only team that has made any moves with a max cat so maybe he was possibly waiting for us to. Maybe he had a hand in us pursuing Amar'e so vigorously?

My heart is racing and both me and my dad feel as if we are going to have heart attacks. My dad has been with the Knicks since time has begun. One of the most loyal fans you'll ever come across. I want our teams to win mostly for him, to finally win will be great. For all you Die Hard Knick fans out there our time is now, The Knicks Are Back! How great would it be if we signed him LIVE on ESPN, the same network that claimed we had no shot at him, that claimed we would still suck, that claimed we will get shut out. Lets prove them wrong, make them eat their words. You don't have to like us, but you damn well better respect us. He moves! He grooves! He flushes it down! LeBron James hammers it down with authority! Welcome to New York, your new home.

Off Topic Update: Knicks having "exploratory" meetings with... wait for it... Carlos Boozer... Rain on my sunny day. Great.

I've been thinking... If this guy does all of this and then signs with Cleveland he's sleeping with the damn fishes. You think Hiroshima and Nagasaki was big? Wait till you see the bomb that drops on Cleveland if this fucker stays. If he doesn't sign here I'll be upset but if he signs there after this whole free agency frenzy he's a dead man. Plain and simple =)

Another thing to point out... Isn't Maverick Carter flying out to NY to meet with us on Wednesday? I wonder what that meeting is gonna consist of. Lets say this conference isn't in New York, he's gonna be a busy man flying back and forth because he should definitely be at the conference also. Or could he be staying in New York because that's where the conference is taking place? Juicy stuff eh. More importantly If LBJ knows where he is going and announcing this at the press conference, there would be no point for Maverick to even visit us. Why would he waste his time? If he still comes what could that mean...? (DEAD)

Here's some more intel, "sources" tell me that Lady Gaga Is scheduled to perform at MSG on the 6th, 7th and 9th. Yet on the 8th she has a day off, the same night when Lebron will announce where he will sign. If he is coming to the Knicks one would assume that the conference would be held at MSG. Coincidence? Maybe, but its fun to speculate. (VERY VERY DEAD)

Some people are wondering what in the world is going to be talked about for a full hour at the conference. I've been giving it some thought and I believe the majority of it is going to be a heart felt moment apologizing to the city of Cleveland and its fans for him leaving. He is gonna try to calm the storm. Make it easier on his hometown fans and explain why he is leaving and that its a business. No doubt he's gonna do that (Assuming he leaves which I believe is HIGHLY likely) and express his love for them. I think that's gonna take up most the time and remember that it is a press conference, there will be reporters there possibly asking him questions and that might take up a chunk of time as well.

Its Gotten Down To The Wire, Do You Believe We Will Sign LeBron?