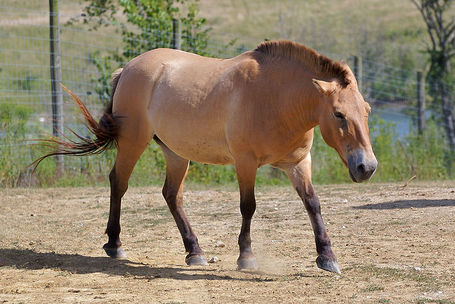 Good afternoon, kinfolk. With the Rooster-Drawing contest now completed, let's hit the linkz. I hope you like speculation and/or horseradish!

- Nikolai Przhevalsky was a certified badass (albeit a certified racist), and has more stuff named after him than I do by a longshot. This includes the world's only remaining wild horse.

- As a follow-up to the Ken Berger article MiketheIntern linked to, Marc Berman is hearing word that the NBA might nix Isiah's official hiring. If that were the case, it'd be interesting to see whether Thomas abandoned his post at FIU or gave up on sticking with the Knicks. That'd be pretty helpful in the "how terrified should we be?" department.

- In any event, this kind of hiring affects not only the perception of the Knicks in the basketball world, but in the real world as well. Shareholders are wild 'n out right now, and we all know that shareholders only freestyle rap and do hilarious improv skits when they're very angry.

- Ziller's got some fightin' words about this whole situation.

- Meanwhile, Newsday's Barbara Barker should have some comments from Mike D'Antoni regarding the Isiah situation on her Twitter page in the near future. She spoke to David Lee recently about the hire.

- MEANWHILE, the ever-suave Dan Devine is the first person I've seen cover Isiah's involvement in opposing Prop 8. It adds a pretty interesting wrinkle to public perception of the guy, and I really hadn't seen anything about it until today.

- Some folks in the horseradish business (which, sources tell me, is booming) think they've got the true test to determine how Jewish Amar'e Stoudemire really is. If this is the determining factor, then I'm definitely a Jew.

- By the way, Roger Mason should officially become a Knick today.

Sorry this ended up being all about Isiah. I'm leaving for some extended vacation tomorrow, but P&T should stay regular all the while. It might be sandier than usual. Thanks for reading, friends.