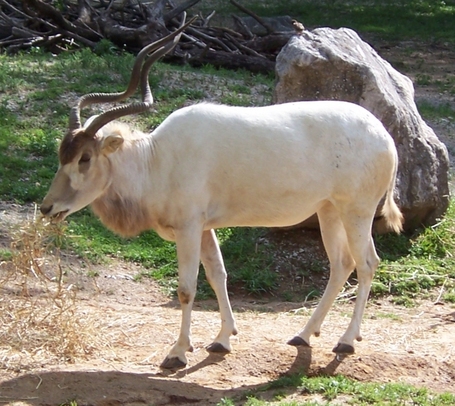 Good evening, chipwiches. Or at least they tell me it's the evening. I come to you from six time zones, a lot of water, and quite a few lizards away. I've managed to find some links in the tropical wilderness, though, and will share them with you after the jump.

- Addaxes are nocturnal antelopes, which is very cool. They're also critically endangered, which is less cool. The plural of addax should be addaces, if you ask me.

- Reflecting on the recent Isiah stuff, folks seem to be converging at a romantic tinge on his relationship with James Dolan, which is either creepily appropriate or appropriately creepy. Dylan at Pardon the Opinion compares them to a young, troubled couple. Will Leitch mentions the notion of a relationship hinging on personal difficulties and second chances.

- Meanwhile, the Knicks asked Isiah to cancel his appearance on 1050 ESPN Radio. Shady as that seems, I'd love for this entire story to be behind us.

- Preseason polls are really just for fun, but we should all totally get outraged that ESPN's panel of 93 experts predicted Amar'e Stoudemire to be the "Worst Newcomer of the Year". Really, though, I'm more miffed at the one individual who picked Anthony Randolph. (As for Stoudemire, Tommy Dee points out that he was also ranked among the best newcomers. Again, this is just for funzies.)

- In a previous links post, commenters noticed that Win Butler's anti-Knicks comments weren't just obnoxious, they were wrong. What Would Oakley Do? unleashes on that very incident in a big ol' post about The Arcade Fire, The Flaming Lips, Bruce Springsteen, John Starks, and well...just read it.

- I forgot to mention this at the time, but I bought this the other day. I feel like a complete person now.

- These pictures make me really, really want to see the Knicks play an exhibition game or something in Radio City Musical Hall. Good lord. (via Knicksbro Matt Lawyue)

I think that'll be it for now. I hope all of you are well. Later.