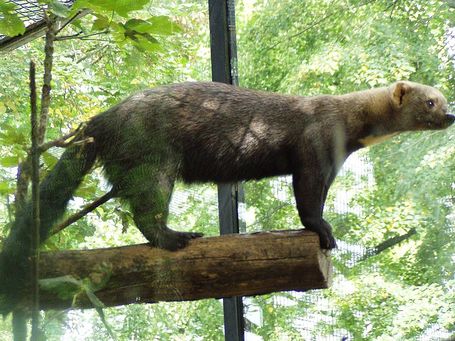 Good morrow, concubines. I hope all of you are well on this rainy Tuesday. As you might have guessed by the giant South American weasel-beast above, I've got some links to share. Jump with me.

- Leading off today is this piece on Amar'e Stoudemire's visit to Disney World. Here's Amar'e:

I have those same ears but they say "Seth" on them! We're totez twins! Let us give Gian thanks and praise for that video.

- In his most recent Fix, Alan Hahn corroborates the Jerome Jordan stuff, mentions that Maurice Ager is definitely a training camp possibility, and sheds some light on two guys a lot of you have been asking about:

Speaking of which, of the other of the Knicks' second-round picks from this year's draft,Andy Rautins was already signed to his rookie contract and, from what I'm told, Landry Fields isn't too far behind. This is typically the time of the year for the NBA when front office staffers go on vacation, so paperwork sometimes takes a little longer to complete. But Fields will be in camp with the Knicks and, most likely, signed to a contract.

Meanwhile, with Jordan out, I know some of you Barronites will immediately ask about Earl Barron, who has an amazing cult-like following of Knicks fans after playing just seven games with the team at the end of the season and averaging 11.7 points and 11 boards. Barron, who last week turned 29, remains unsigned. The Knicks renounced his rights last week, according to the website, ShamSports.com, but that was likely for bookkeeping purposes to clear up cap space to sign someone who makes the team after camp ends. If he doesn't have better offers, Barron can get a camp invite and if he makes the team, can sign another vets min.

- I've been sitting on this for a few days, but I consider this piece by Larry Coon to be the be-all end-all of Carmelo Anthony articles.

- I've had this tab open for a few WEEKS, but somehow never got around to linking y'all to WWOD?'s birthday post for John Starks. It's excellent stuff.

- Just a reminder that the best and brightest shirts from the Rooster-Drawing contest are up for sale in the P&T store. Don't pass on this opportunity to be a part of freshness history.

- David J. Halberstam's "Top Broadcasters in New York Sports History" are up for all to see on SB Nation NY. You'll certainly recognize some names. No Mike Crispino, oddly enough.

- This is just a boat of dogs: dog passengers, dog skipper, and a dog towing the thing.

Have a great day, everybody. Remember to have 2-3 servings of milk, yogurt, or cheese. I love you all so very much.