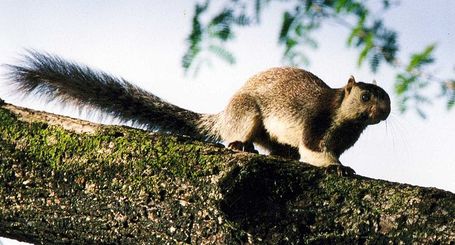 Morning, tadpoles. I know I just shared some mammals and links yesterday, but I'm doing it again, y'all. More mammals, more links. You're crazy for this one, Seth.

Jump for my love.

- A grizzled giant squirrel is a squirrel that is larger and more grizzled than its peers.

- Alan Hahn has been holding court on Twitter this morning, and he twat the following about a Knick who's been tough to find this offseason:

From what I understand, Eddy Curry hasn't been at the MSG Training Center since late June.

@Mritakepictures Actually, the fact that I haven't heard anything - ANYTHING - about Eddy Curry since early July is a serious concern.

Eerie stuff, particularly since we're used to Eddy being pretty conspicuous in the summertime.

- Dan Miranda of the up-and-coming blog Knicks Vision showed up at my house last week in an old white van. He invited me to join him in the van, but I objected because I'm not supposed to talk to strangers. But then he offered me cotton candy, and I asked him if he had blue cotton candy, and he said yes, so I joined him in the van because I love blue. Then he tied me up and interviewed me. It was a harrowing experience, but at least I got some cotton candy!

- Brian Cronin's terrific "Unsung Knicks History" series at Knickerblogger continues with a tribute to a particular mid- 90s game of smallball. Don Nelson was obviously involved. Definitely click that link if you were a Gary Grant fan, and really, who wasn't a Gary Grant fan?

- The state income tax rears its ugly head again as the Carmelo Anthony storyline gets staler by the day.

- From that same article:

The Knicks' roster now has 14 players and they could fit center Earl Barron, who had a strong finish with the team.

The Knicks had interest in Barron, but Knicks president Donnie Walsh, according to a source, has not heard recently from the Barron camp and isn't sure what his future is.

I've never understood why anyone would want to play for the Knicks; no matter who they hire, the team is still owned by James Dolan. That's why "it's New York", or "Madison Square is the Mecca" are such selling points -- and so laughable. Houston, while it offers its share of nightlife, also has a legit basketball organization there. In other words, there are real basketball reasons to relocate down there.

Now everybody grab your pitchforks and GO ATTACK BETHLEHEM SHOALS!

- Woody Allen has become a pretty rare spotting at Knicks games, and it sounds he's considering a permanent departure from our fair city.

- I think that last bullet gives me an excuse to link to this.

Those are the links. More later, you pretty things.