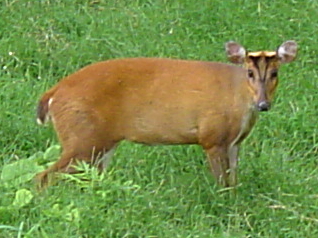 Good morrow, beaugregories. Sorry if posting's been a little slow while each of the P&T bros is out of their respective towns. Nevertheless, I've got some links to share with y'all.

Jump if you dare.

- Muntjacs are also known as barking deer...because they bark. It's terrifying. Also, these bad boys are native to South Asia, but it seems like some of our Posters & Toasters in England might have encountered one before.

- Gian passed along this article about Toney and Harry Douglas. It's the usual reminder that Toney's brother plays for the Falcons, but it also comes with this earth-shattering quote:

"I have no friends, really. My friend is my brother," said Toney, 18 months younger than Harry, who turns 26 in September.

Toney, I see what you're getting at, but you've got plenty of friends at P&T. Don't ever forget it.

- Marc Berman reflects on the draft night decision between Danilo Gallinari and Anthony Randolph and the serendipity of the two ending up together this season.

- D-League Digest has been grading teams' use of D-League resources, and the Knicks' report card doesn't look great. New York's had their share of call-ups, but Earl Barron's mini-renaissance last season is the most they have to show for it. [Spills some out for Cheikh Samb.]

- With another signing of Patrick Ewing Jr. comes another debate regarding his jersey number. I doubt Pat Jr. will even ask for #33, but it's an interesting question. I say he's only allowed to wear 33 if he wears the actual uniform that was retired. Watching a guy run around in a giant jersey that's been gathering dust for a years would be worth the historical smearing.

- Biggest free agency news of the summer, y'all. Quincy Douby:

My agent is talking to the Suns, Knicks, Cavaliers, and Bulls. We're trying to see what situation will be the best for me to just get on the team and give a contribution," he said.

- Matt Moore talkin' sense about the Carmelo Anthony situation. We must always remember that rumors have sources, and sources have agendas.

- Andy Rautins has a knee injury?

With that, I leave you. Have splendid days, friends.