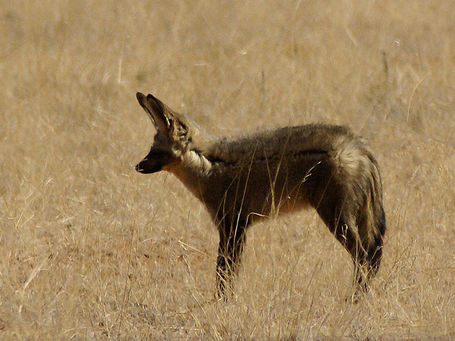 Ba-de-ya, friends. As we turn one page closer to Basketballtober, I've got some bat-eared links to share with all of you. Keep commenting and posting, by the way. Charlie, Gian, and I have some ideas and posts planned in the near future, but it's just the funnest when everybody's contributing. Anyway, on to the links.

- Bat-eared foxes are in the genus Otocyon, which pretty much means "Eardog" in Greek, which I think would be a much better name for this animal.

- I feel differently about the Carmelo Anthony rumors every day, and Andrew Sharp's splendid piece on the fellow adds to the conversation:

He's not getting bodied out to the three point line like Kevin Durant, he's got a faster first step than Paul Pierce, he's got more range than any of the superstar big men and he's proven he can take and make big shots. Carmelo is probably the fourth-best option in the NBA for a game-winning possession. Even if we concede that he's a gunner during the other 47 minutes and incapable of changing, he's a worthy addition to any franchise that plans on playing in big games anytime soon.

I tend to side with the stat-heads when it comes to Melo, but those last two sentences resonate. We bitched all the time last year about how the Knicks didn't have a closer (though David Lee did his darnedest). Will that change this season? Is Amar'e Stoudemire a late game warrior? Can Raymond Felton lead a final possession? Is Danilo Gallinari ready to bury game-winners? These are all real possibilities, but a team with Carmelo Anthony knows exactly where it stands in the clutch. I just don't know.

- 4 of Hoopsworld's "Top 5 Smartest NBA Players" were once Knicks. It's sort of a silly, unscientific exercise, though. Plus, they forgot Howard Eisley, inventor of the iron lung.

- As Alan Hahn predicted he might, Andy Rautins is shutting it down for the rest of the world championships. Gotsta get that knee healthy for training camp.

- I just sneezed so much.

- With the Knicks headed to Europe this fall, I'm curious whether or not the guys have been overseas at all. Wilson Chandler confirms that he hasn't been any farther than Toronto.

- Matt Moore, who's been on a bit of a Knicks tear lately, takes a logical look at whether or not New York can make the playoffs. It's all speculation, of course, but it does give you a sense for just how many wild cards there are in the East this year.

That's it for now, eardogs. Hope everybody's starting September off in style.