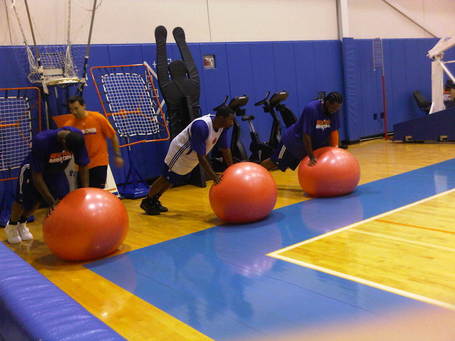 Osborn and I are here in the media room at the MSG training facility, and we figured we'd get some notes up while we wait for AAA to come fix (and/or tow) my car. Here we go:

- The open portion of today's practice started with five-man defensive drills. The team was broken into three units and each had to scramble and communicate while coaches worked the ball around the perimeter. After that came three-man fast break drills starting with an outlet pass and ending with a quick pick-and-roll or a kick-out. Practice ended with an all-out circuit training session which was tougher than any I've seen in years past. There were a dozen or so different stations with everything from sled-pulls to cone-dribbling to squats to physio ball planks. Players rotated from station to station in groups of three, running each drill for a minute and getting only a few seconds of breathing time in between. The guys were beat, y'all. A couple of guys- Amar'e Stoudemire, Andy Rautins, Landry Fields- looked especially crisp in drills, while a few others- Eddy Curry, Ronny Turiaf, Bill Walker- were visibly struggling. Pretty much across the board, though, the whole ordeal kicked the living crap out of the entire squad. Everything ended with some stretching and media availability while Stoudemire stayed late to cop a couple hundred shirtless jumpers.

There isn't much to be gleaned from fixed-unit, non-contact drills (scrimmages should start this evening), but take the jump for a handful of individual notes:

Timofey Mozgov looked pretty sharp sliding his feet defensively all the way out to the perimeter. His jump shot wasn't falling, but Timo stayed active and didn't cut corners during the conditioning stuff.

Landry Fields may have added some muscle since we saw him in Vegas. He was also getting UP in the fast break drills.

Amar'e Stoudemire takes these drills more seriously than most people I've seen. The newly minted co-captain went full speed start to finish, barked orders when he was on the sidelines, and finished every fast break drill with a massive tomahawk. Also, goggles.

I need to look back at this post for reference, but Osborn and I both agreed that Roger Mason's stroke looked like it had gotten some attention over the summer. Os noticed that his feet were almost comically far apart, and it also seemed like he was cocking the ball lower and farther to the right than previously. Either way, the shots were falling pretty consistently.

Raymond Felton likes to shoot floaters that almost graze the top of the shot clock. I can not explain this habit, but I approve.

In the 3-man drills, Danilo Gallinari handled the ball quite a bit. Just saying.

I mentioned it on Twitter, but Stoudemire and Felton introduced as co-captains at last night's team dinner.

Check out TKB for videos and quotes from the morning practice.

Again, there's much more to be learned from scrimmages than drills, so we'll have some juicier stuff later on. In the meantime, be well and pray for my car.