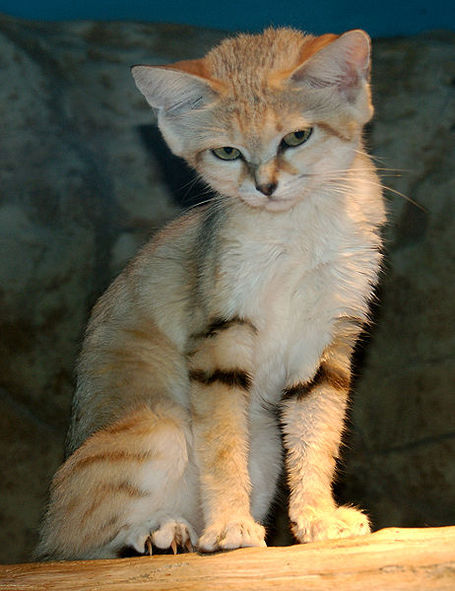 Good afternoon, uncrustables. Against all odds, the Knicks are continuing training camp without Osborn and I present. How they managed to scrap together more practices without the two of us giggling in the corner is beyond me, but I'm happy for them from afar. What follows are a bowel-load of links and other odds and ends, either from today or left over from this weekend.

Do a few mouse-clicking exercises to warm up, then take the jump.

- Sand cats are the chillest cats. I'd need to check with Toney on this one, but I'm pretty sure sand cats DWTDD.

- Our friend Anthony Donahue of TKB Radio put together an excellent fund-raising event that included Wilson Chandler and Patrick Ewing Jr. buzzin' kids. The event was in honor of Anthony's sister, who is coping with brain cancer, and also raised money for the Garden of Dreams foundation. Anthony mentioned to me that both Wil and Patrick showed up way early and stayed late for the event. Also, though Chandler was apparently a little apprehensive with the razor, there were no Barber of Seville-esque moments this time around. Basically, this was great people doing great stuff for a great cause. Check out the pictures.

- Just to get Carmelo Anthony stuff out of the way, here's something. Here's more.

- Now, regarding players that are actually on the Knicks, Will Leitch's opus on Amar'e Stoudemire has finally dropped, and I imagine it'll give you same of the feelings that I got from watching him practice. I compel you to sit down and read the article in full, but here's a tiny snippet:

During a stop in play, Stoudemire impulsively drove to the basket and hammered down one of his signature dunks, a violent, pathological windmill. Everything else stopped, and the gym roared. By chance, I happened to catch the eye of D’Antoni. He does not know me, but he returned my glance with a raised eyebrow and a "Hoo boy."

I left Westchester this weekend amazed by how easy it is to tell that Amar'e is something else. His ability to run and dunk is astounding, but the guy is equally impressive standing still. I've never seen a human being built quite like he is. Anyway, read that article.

- Howard Beck confirms our suspicions that Eddy Curry has actually put on some weight since we last saw him. On that note, here's Trey.

- I forgot to mention this, but there was a point yesterday at which a rogue basketball nearly rolled under Timofey Mozgov's airborne foot while he was practicing post moves with Herb Williams. A ballboy intercepted it to prevent any ankle situations, but I'm pretty sure I would've been the last line of defense if he hadn't been there. I saw the ball coming well in advance, but it still would have required a Web Gem-worthy dive for me to deter the disaster. I will forever wonder whether I would've risen to the occasion and what consequences that would have had.

- Remember what I said about the Knicks' practices falling apart once Charlie and I departed? This weekend, Mozgov and Herb Williams spent hours after practice polishing the Russian's post moves. Today, they're tossing pigskins. Dreadful, I tell you.

- Here's Ronny Turiaf shooting layups, but also pay attention to the conditioning stations in the background. Word has it today's stations were even more rigorous than those of previous days.

- For more on the previous two points, here's Alan Hahn:

The team also opened the session by running sprints with an added twist: they tossed footballs to each other. Afterward, Mozgov was getting a lesson in how to pitch the pigskin from assistant coach (and proud alumn of The Ohio State University) Herb Williams, who at one point turned to a few reporters and yelled, "Buckeyes!"

The idea is to try to take the monotony out of the conditioning drills by making them fun and, in some cases, competitive. There was no one in the gym going through the motions here.

- Steve Adamek is also impressed with the conditioning regimen:

One station is an agility drill in which players at one point look like they’re playing hopskotch.

Another involves two huge ropes, which players have to swing in an up-and-down motion, presumably to strengthen their arms.

There’s a rowing machine that Russian rookie Timofey Mozgov (not far from where he cut a huge gash in the floor when he flipped a weighted sled upside down) actually moved slightly, he rowed so hard. No gash left behind this time, but imagine a 7-foot-1 guy in a single scull, pulling furiously.

D’Antoni acknowledged there’s a method to all this: He has athletic players with whom the Knicks want to run more.

- Landry Fields will be blogging at the Knicks' official website. The first post is pretty empty. Could be much Landrier.

That's all for the moment. I might add more stuff as the day goes on, as there will likely be more to talk about after the evening practice.