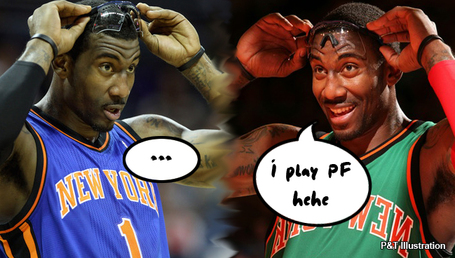 Amar'e Stoudemire is a superhero with powers to save a city playing center for the New York Knicks. Like all superheroes, he has weaknesses that can be exploited by villains on other teams. In Knicks '10-'11: Issue 32, Orlando Magic villain Dwight Howard was able to use his super strength to dominate the glass, out-rebounding Stoudemire 18 to 4. Howard also used it to control positioning and keep Stoudemire in foul trouble the entire issue. Many critics are weary of his weakness against villainous centers with super strength. They argue that it keeps him out of the elite tier of superheroes with your Thor's and Superman's. That's fine. I'll buy that argument even though we've all seen Amar'e throw down the hammer with thunder and lightening countless times. My problem is with those that want to see him return to his "natural position" at power forward against these foes, as if there's anything "natural" about superheroes anyway.

Perhaps they're unaware of Bizarro Amar'e Stoudemire, Amar'e's power forward-playing opposite, who makes appearances in some issues.

Bizarro Amar'e is the mirror image of Amar'e. He does everything the same, except opposite, meaning he still has powers but kind of sucks.

This year Bizarro is shooting, rebounding, scoring and, uh, efficiently rating worse than Amar'e per issue. Bizarro even fouls more often which is said to be part of the problem when Amar'e battles stronger villains. So how does Bizarro affect the team's success?

While Amar'e helps his team outscore opponents by 4.5 points, Bizarro's team is outscored by 1.1 points.

So, are we to believe that Bizarro is better than Amar'e? Can Bizarro really save a city with his inferior powers? As the debate continues in 2011, we can only wait for future issues to read. But Amar'e may be telling us already that only Amar'e is real.