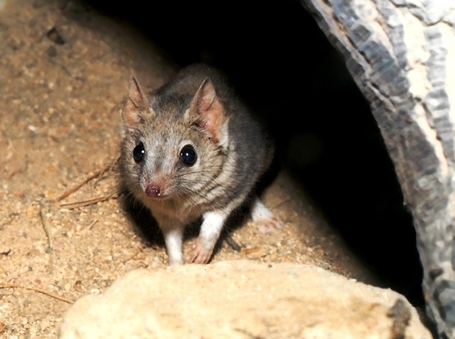 Good afternoon, appetizers. I'm still out of the MSG market, so the invincible and indefensible Charles Osborn will take care of your game coverage for tonight's match-up with the Blazers. I'm not out of the links market, though, so take the jump to see some thangs worth clicking.

- The kowari is a little carnivorous marsupial that calls Australia its home. Its selection confirms the age-old maxim that if you're having trouble finding a mammal, there are ALWAYS more Australian marsupials (and they always have great names). On that note, I might be switching from mammals to a different taxon someday soon. Brace yourself.

- Marc Berman mentions that the Knicks (like every team, I'd imagine) are scouting the ongoing D-League showcase in Texas. One interesting guy who I mentioned yesterday is Jeff Adrien. He's an undersized rebounder (one of my favorite clades of the basketball-playing population) who's already dominating the showcase. Also, he wears goggles, so he'd fit right in here. There has already been a solid Fanpost or two on the subject, and I encourage you to keep an eye on the showcase and report back with any worthwhile scouting intel.

- Any D-League call-up, of course, would require that somebody be cut. From that same article, Berman is under the impression that Eddy Curry will be bought out if he's not included in a deal before the trade deadline. Take that assertion however you please.

- Knickerblogger's "Unsung Knicks History" series continues with Willis Reed POUNDING FOOLS. Even if you're illiterate like I am, you should click through to see the picture.

- The graceful Rob Mahoney dissects and reflects upon Jordan Hill's young career. I'm rooting hard for the guy to amount to something in Houston, but like Rob says, he's still not a very fluid athlete. I think that's something we all noticed during his brief tenure in New York.

- Walt Frazier still isn't on Twitter, but there is a pretty magnificent impostor out there.

- Steve Adamek catches up with David Lee, who is as classy as ever.

- Amar'e will appear on Letterman on Thursday, and has plenty of confidence in his team (although the headline of that article keeps changing and still seems to be putting words on Amar'e's mouth. Whatever.)

- Get to know Tommy Dee.

And with that, I'm off! Enjoy your 'fternoons, everybody. I won't be able to watch Knicks-Blazers, but I'll certainly be around later to bug y'all. <3.