Raymond Felton is having a turbulent first year with the Knicks. Stumbling through a 3-8 start, his struggles early on executing the pick-and-roll made a few people wonder if he was the man for this job. Would he turn it around? Could this team recover?

It did, and so did he. When the Knicks won 12 of 13 games early last month, Felton masterfully silenced all doubters. He ranked favorably among other star point guards in the Association coming in 7th in scoring and 8th in passing. He was playing the best ball of his career, leading a surging Knick team up the standings, and putting up stats we all assumed he could in a free wheelin' offense. Combine that with his defense and bulldog toughness and it's easy to see why he quickly warmed the hearts of MSG.

Fast forward a month with the team going through another rough patch, losers of three straight, and six of their last ten. One loss being a complete no show against the worst team in the Western Conference. Amar'e Stoudemire calls it "unacceptable". The problems aren't the same. The competition is decidedly stiffer. The defense is getting worse and opposing point guards are tearing up the perimeter like old. And the injury bug is invading New York's beds striking Danilo Gallinari's knee, Stoudemire's shoulder, Ronny Turiaf's everything, and, yes, Felton's own wrist and ankle.

And his production is spiraling dramatically.

Felton's been missing a ton of shots lately. Over his last ten games, he's shooting 38% and 29.8% from three, an effective field goal percentage of 43.3%. That's bad - the league average is 49.8%. Looking month over month, there's a steady, troubling decline in his scoring production because of his inefficiency. 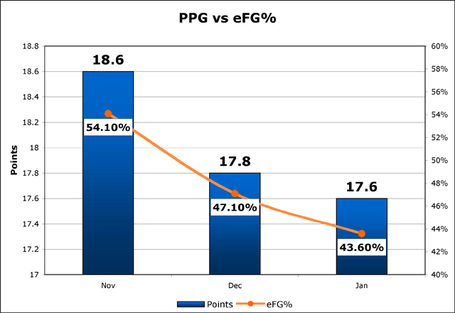 Ray's gone from well above league average in November to a crummy 6% below in January. Have a look. It's pretty awful company. The immediate thought is that he's taking and missing too many attempts from three, but truth is he's just about at December's average (1.8-5.5 in Dec., 1.7-5.3 in Jan.). What I've actually noticed is him blowing several shots around the basket of late. 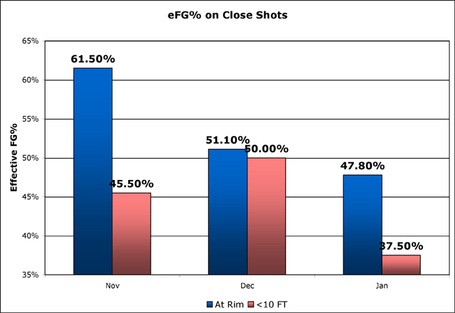 Felton went from converting 61.5% of his layups in November to 47.8% this month. His conversion from within ten feet is also down to paltry 37.5%. Those drives? Seemingly nullified. The floaters? Not dropping. It's inexplicable and unfortunate because he's getting to close range at his highest rate this year - 5.4 attempts in Nov., 5.3 in Dec., 5.6 in Jan.

On a positive note, his rebounding is up and his assists are stable. But his scoring efficiency isn't just regressing to the mean, to his Charlotte numbers. Right now he's well below them and trending in the wrong direction. The nicks and bruises have caught up, I'm sure. And the perils of the season under this pace can't be forgiving. He needs to turn it around once again. The first two months couldn't get much higher but Raymond needs to respark the soul and rebuild the energy.