Is Wilson Chandler Wearing Down by Quarter?

Share All sharing options for: Is Wilson Chandler Wearing Down by Quarter?

I'm an MMA fan. A lot of people still don't "get" the sport and consider it barbaric. I'm sure I don't fully "get it" either, but that one UFC event each month is fun times. I enjoy seeing the different fighting styles. And I don't consider it barbaric cause the refs generally stop fights at the right time. But really, what I appreciate most is a fighter's conditioning. It takes an absurd training routine to go flat out for five minutes at a time. Just ask Sean Sherk. But even then, some fighters are spent after one round cause they find an opening and unload too quickly, only to tire themselves out.

Apply that to basketball. It's not unlike the Knicks' strategy. Wear the opponent out. Make them expend their energy running with this team. They may take some punches early, but they're still swinging in the final round. Or something like that.

There was a fantastic piece written by Loren Lee Chen and Aaron Fischman for SLAM the other day on Blake Griffin's inability to sustain scoring production throughout the course of a game. They found that Griffin scores a bunch in the first quarter and sharply drops off afterward, arguing that his style of play - the obscene aggressiveness and energy exerted ruining psyches via aerial assault - depletes him of his resources as games progress. Enlightening for sure and sound on logic.

Brimming with curiosity, I looked at how individual Knicks scored by quarter to find trends, if any. One is an interesting nugget. 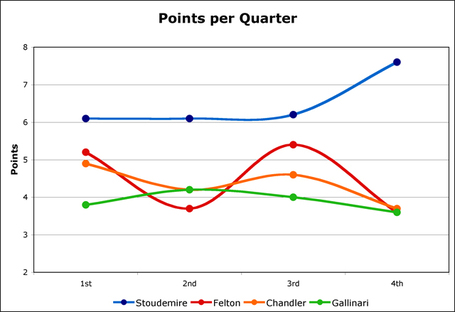 Nothing you haven't already come to expect. Stoudemire leads the league in fourth quarter points. We've seen him carry the offense on his back to close out or get back into games. It's both unsettling and inspiring. As a result, or out of necessity, the other top contributors all hit their floors in terms of scoring in the final frame. Of course, this doesn't take into account rotations and minutes played so here's a look at points per minute. 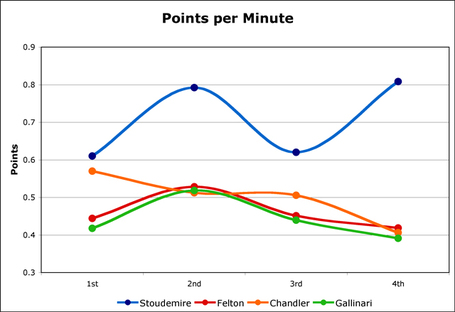 There are some obvious changes when viewed per minute. We see Amar'e Stoudemizing at fourth quarter levels in Q2. Second-unit opposition perhaps? Maybe he just likes even numbers. That'd be odd considering he wears #1. We also see how eerily similar Felton and Gallo perform throughout the game. Notice Wilson Chandler's output, however. He's scoring slightly better at the start of games than at the end of games both in raw totals and per minute. 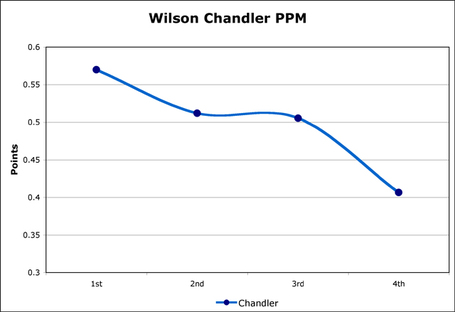 A subtle but steady decline. It's one I wouldn't have expected, but it brings to mind the Laker game where Wil erupted in the first only to taper off by the end. Apparently it happens more often than I remember. What's the issue? 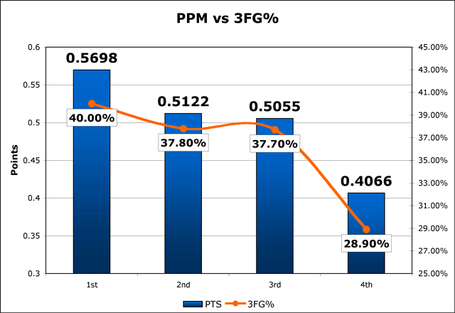 One problem is his three point shooting. It has a direct effect on his points scored per minute. He starts off games shooting 40% from that distance and ends shooting 28.9%. From great outside threat to awful shooter. Is it poor shot selection late in games or is he wearing himself out like Griffin?

Chandler's probably the second most athletic player on the team. We know he can throw down some vicious offerings. We also see him run expertly on the break. But how much is the pace affecting him late in games? Is the dip in three point percentage a sign of fatigue? Perhaps his legs aren't with him on those late game shots. Let's also remember that Chandler plays the four when the team's at full strength. He fights for position with much larger players on defense and teams aren't exactly shy of exploiting the mismatch. That has to affect his lift by the end, probably more so than the pace.

That said, we know small ball is the team's most effective lineup and benefits everyone on the offensive end - Amar'e, the team, and Chandler himself. And there's nothing wrong with Amar'e being the primary scorer in the final frame. It's part of what makes him a superstar.

If it is indeed an issue with fatigue, Shawne Williams and Bill Walker have earned some extra minutes even with Gallo coming back. Maybe more rest is available for Wil with their emergence.