Share All sharing options for: The Knicks' Fourth Quarter Set vs Pacers

In a game sloppy enough to rival Ke$ha, the Knicks kept it simple in the fourth quarter, choosing to run the same set on their final seven possessions against the Indiana Pacers. I took a closer look at the results and the adjustments both teams made down the stretch.

It began with a corner three from Wilson Chandler that swung the momentum in New York's favor for good. 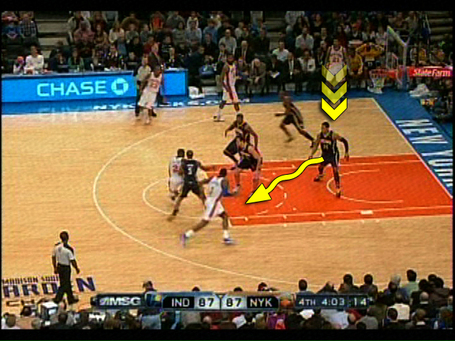 The set started with the bread and butter pick and roll between Amare Stoudemire and Raymond Felton. They ran it to the side with the other three players on the opposite wing/corner. Jeff Foster hedged to prevent Felton from driving which forced Danny Granger to completely abandon Chandler in the corner to help cover Amar'e on the roll. 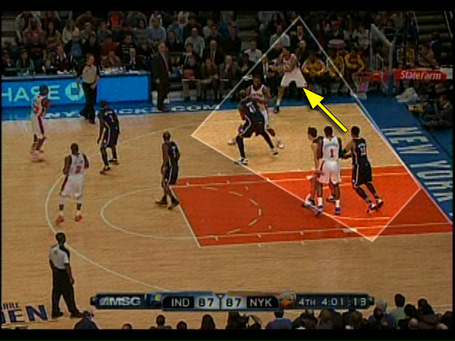 Felton swung the ball to Toney Douglas who hockey assisted it to a wide open Chandler. Granger was too far to recover and Ronny Turiaf also put his muscles to work and screened James Posey from rotating over.

The result was the said corner three. Pacers called time like, "i c what u did there."

Posey decided not to hedge the following trip down. Felton saw this and took it to TJ Ford and earned a pair of free throws.

This time Felton hit Amar'e on the roll but Granger, who came off Chandler again, rotated over and made Amar'e pick up his dribble. They worked the ball over to Chandler again in the corner but Granger, seeing this thing before, ran back to Wil earlier. It came back to Amar'e who put a move on Posey and got a basket.

On the next play, Felton let Amar'e work in the post off the screen. Posey couldn't defend Amar'e down there in his darkest, most twisted fantasies and Amar'e scored beautifully on consecutive possessions as a result.

The Pacers made an adjustment on the fifth possession. Posey came off Amar'e and trapped Felton off the screen. Solomon Jones came off Turiaf to pick up Amar'e on the roll. Although he still got close to the basket, and even though the shot rimmed in and out, one has to think Jones was more difficult to shoot over than Posey.

Here the Pacers defended the play the same exact way with Posey trapping and Jones rotating. Felton decided to shoot a jumper that went every kind of wide ever.

The final possession was the culmination of the previous six. Posey and Jones defend the same way, probably out of muscle memory at this point. The ball swung out to Chandler in the corner, but Granger was ready again. Douglas took this opportunity to do what Toney Douglas do and kicked it to Amar'e for the kila.

The Knicks scored 5.8 points less than their season average efficiency yesterday. When the offense sputters like that, even the best offensive teams go to the two-man game. It keeps things simple and puts the ball in the hands of their two best players. The Pacers, to their credit, made adjustments but Amar'e Stoudemire was once again outside his mind.