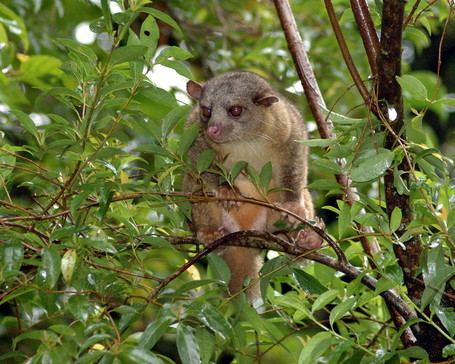 Good evening, fauns. It's been a newsy day, and some smaller bits and pieces have been glossed over. Some of this stuff has been addressed in the Fanposts and comments, but I'm just making sure we've acknowledged everything worth acknowledging.

Take the jump for some bits of news and other l8-nite links.

- Wanna see an olingo navigate a tightrope? Of course you do.

- Landry Fields won Rookie of the Month again. HO-HUM. That Griffum guy won for that other conference.

- As was mentioned in the Fanposts, Jerome Jordan paid the Knicks a visit recently. He's still chugging along in Serbia and won't be permanently stateside anytime soon, but it's worth remembering that he still exists.

- After some provoking by Gian, Bill Walker issued a statement regarding his minor altercation with Roy Hibbert. It's not not awesome.

- Omri Casspi, or whatever. I'm pretty sure that anytime anybody's on the block, ESPN writers just toss the Knicks in among teams expressing interest.

- Tommy Dee has video footage of how Kelenna Azubuike spends his practices. I'm probably just projecting what I already know, but it does seem like he's favoring that knee.

- The Knicks' starting lineup (until Danilo Gallinari went down, that is) is middle-of-the-pack in terms of efficiently allocating possessions. The numbers at hand shed a bit of light on how just how rarely Gallo was handling the ball.

- This Raymond Felton jumper is brought to you by Super Pretzel Soft Pretzel Bites!

That is all! Just wanted to make sure none of the day's stories fell through the cracks. Enjoy the night. Don't stay up too late.