Share All sharing options for: The Knicks Expose the Spurs' Zone Defense

The Spurs came into the game ranked seventh in defensive efficiency, but the Knicks attacked them every which way they pleased en route to a 128-115 victory. Gregg Popovich even resorted to some zone defense midway through the fourth quarter in an attempt to stop the bleeding. But what's a band aid to a headshot?

This possession ends in a corner three for Toney Douglas. 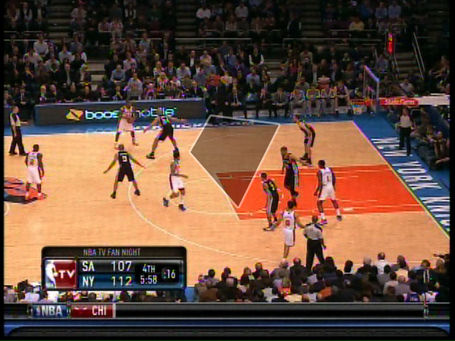 Manu Ginobili abandons Wilson Chandler to provide immediate help to the left side. One has to wonder why Pop decides to let Chandler roam free when he's going Boar's Head but it leaves the middle completely open. 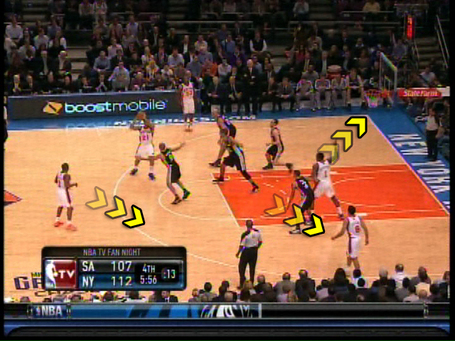 Chandler goes to that open spot and four defenders converge on him on the catch. From here, he has three options. He can throw it up over the defense to Amar'e Stoudemire who's now being played by George Hill, he can hit Landry Fields in the corner, or he can lead Raymond Felton with a pass for a three. 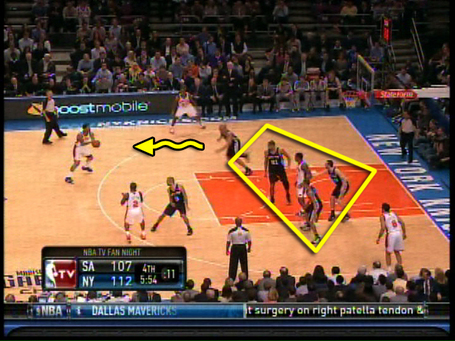 He hits Felton which makes the defense shift sides. You see the Spurs triangulate Amar'e, so Felton swings it to Chandler. As Richard Jefferson closes out on him, he hits Douglas for an open shot.

Douglas DidWTDD and Pop scrapped the zone, as well as the game, soon after.

The Spurs first went to the zone on this possession. Felton screens Tim Duncan, ineffectively but consider the size difference. When Amar'e comes off it, Hill stays in that zone for a bit before leaving Felton to double. The Knicks work it all the way back around and Felton drives on Hill's hard close. The outcome is two free throws.

Same strategy on this play. When Amar'e receives the ball, Hill leaves his man and plays zone between Amar'e and the basket. This forces RJ to play way off Chandler to defend the basket as Felton sashays across the paint. Like Hill, RJ closes hard, allowing Chandler to get a step on him for a layup.

The Spurs were within striking distance throughout but simply couldn't get stops and the zone was a sign of desperation. The Knicks attacked it perfectly even with the Spurs working hard to run out on their shooters. On each clip, pay attention to how the Knicks swing it weak side, away from Amar'e, and more importantly, away from Tim Duncan who couldn't rotate over in time to defend those drives to the basket.