Share All sharing options for: Seth and Osborn Go to a Carmelo Anthony Sneaker Release Party

On Friday, Osborn and I attended a party celebrating the release of Carmelo Anthony's M8 sneaker thing that you put on your feet. I've been asked to share the details of our experience, so here they are:

- The event was at Pier 54, which is a...pier that juts out into the Hudson. We arrived just after the doors opened and waited on line to get in. The line was composed primarily of women who were much taller than us and had shiny hair and smelled fancy. Music, though seemingly a mile away, was loud enough that people didn't hear Charlie and I conversing while we waited, which was probably a good thing.

Take the jump for more.

- Upon being checked off certain lists and release forms, we entered the party area, which was relatively narrow but extended quite a way into the water. Directly in front of us were some illuminated showcases containing sneakers. On one side of the pier was a row of pop-a-shot games. On the other side was a row of food trucks. At the far end was a stage and dance floor with a DJ doing DJ things and people doing dances. We beat a hasty path toward the food trucks.

- Osborn and I each consumed a delicious chicken sandwich and fries from a vehicle I've since learned was "Big D's Grub Truck".

- While digesting, we wandered over to the pop-a-shot stations. Neither of us actually got a chance to shoot because this girl was a goddamn ballhog even though she could barely even land her shots within the walls of the pop-a-shot apparatus, let alone the net. Further investigation revealed that the most populated of the pop-a-shot stations (there's a rap lyric in there somewhere) was receiving so much traffic because its scores were projected on the side of a building across the water. Like this: 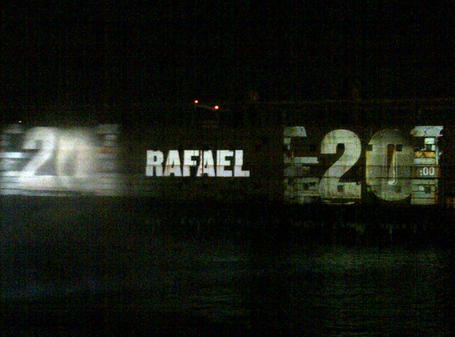 - After examining the pop-a-shot situation, we got cupcakes because the only available dessert was cupcakes. I got a salt caramel cupcake and Osborn got a Samoa cupcake. As cupcakes go, they were pretty tasty. While we were eating our cupcakes, a helicopter appeared overhead and hovered over the water alongside the stage. A spotlight revealed an individual hanging off the side of the helicopter. Said individual promptly rappelled several hundred feet into the water below. Soon thereafter, sprinklers embedded in the river sprayed sheets of water while lights under the pier projected 3-D images of Melo wearing cool sneakers and dribbling a basketball and doing all sorts of Godzilla-like "splashing". Osborn and I pooped our respective pants out of sheer bafflement. The real Melo (who was, I'm afraid, not the one that rappelled into the Hudson) then appeared on stage wearing sunglasses and a cool jacket with a picture on the back and welcomed everyone and announced that there was a surprise coming. Osborn and I finished our cupcakes and went back for seconds.

- While we were eating our second cupcakes, (Osborn had a creamsicle-flavored cupcake. I had a mint chocolate cookie one.) the DJ announced that Nas would perform. We moved closer to the stage, cupcakes in hand, and confirmed that, indeed, Nas was performing. He did like five or six songs (Osborn can tell you what they were) while Melo stood in the VIP section and did a lot of pointing and sunglass-wearing. He appeared to know all the words to "One Mic".

- Though there were still two more cupcake flavors to sample, Osborn and I opted to leave after the Nas set. On the way out, we passed very close to Chris Paul, who was on his way in after a day of failed labor negotiations. A nearby party attendee asked Paul if he would come to the Knicks, and he didn't say no.

And that's what happened at the Melo sneaker release party. Here's some video (not taken by me). I'm not joking about this light show, guys.