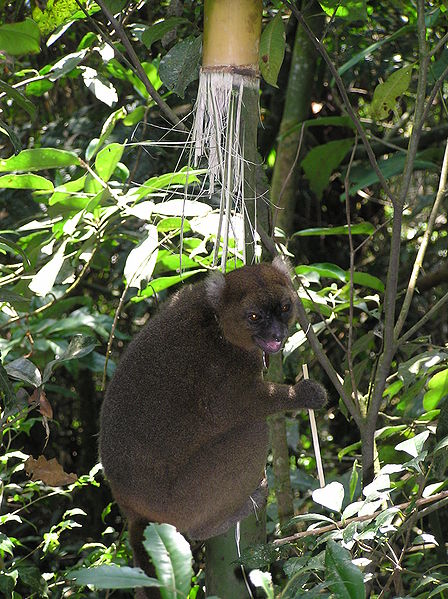 Good evening, particles. Thanks to those of you who've been commenting on this morning's Lifestylez post. (I should probably contact the the manufacturer of faulty condoms for sponsorship, eh?) I'm going to keep doing them, although I think I might start posting them at night. Let me know if you have any suggestions.

- I'm pretty sure I've done at least one species of bamboo lemur before, but I don't think I've done these guys. (The search function isn't working. I suppose it's my responsibility to get that sorted out.) They're quite lovely, and they're also critically endangered (despite their ability to snack on cyanide like it's nothing). So, if you see one, try not to make it hurt or dead, because it's one of the few remaining.

- Mikel L beat me to posting this, but the guy who pronounces athletes' names has finally produced a lesson about the Knicks. Please study and rehearse so you can be prepared to sound like an expert when the Knicks return to the court.

- Ian Begley and Jared Zwerling tried to estimate exactly how much cheesy bread the Knicks missed out on when they were denied their first paychecks. If it weren't for the lockout, somebody would have handed Carmelo Anthony a check for 1.5 MILLION DOLLARS. I can't even begin to comprehend how much money that is.

- Iman Shumpert's newest Lockout Diary for the Post is, in my heroic opinion, his best, probably because of this bit:

I had plenty of seafood and even tried a pineapple-drink thing with two Coronas flipped upside down,inside.

How that’s done I do not know, but it was definitely cool.

I anticipate saying that a lot when Shump's playing basketball for the Knicks. [weeps]

- Alan Hahn's book is available for pre-order...for a year from now. Oh, how I despise this lockout.

- Here's a full report on the Cuttino Mobley stuff. Like a few of you have said, those Knicks needed Cuttino's help in the backcourt. We don't really know what went on behind the scenes, but I'm not sure why they'd do what Mobley says they did (nor that his allegations even make sense). It's the Knicks, so you never know.

That is all, sweet babies! Enjoy your evenings.