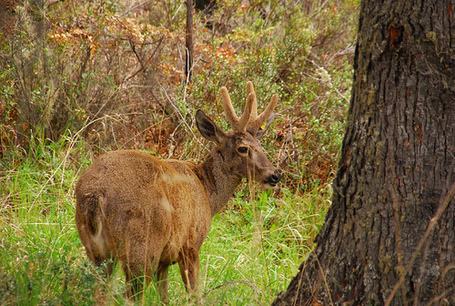 Good day, egg beaters. I hope you're all having pleasant Wednesdays despite the absence of a Knicks season opener to look forward to this evening. I am definitely doing just that and definitely not tearfully gnawing on a blanket right now.

Let's look at some links and whatnot!

- First of all, huemuls are good friends. They're some very handsome endangered deers that live in the Andes. There's one on the Chilean coat of arms!

- I think I'd like to post "non-game" threads during the times that would otherwise be occupied by Knicks games. My initial thought was just to open discussions about silly, non-basketball topics. I'm also open to posting game threads around MSG broadcasts of old Knicks games, though doing that properly would require my getting electricity back at home (I have been camped out at my alma mater for almost a week now). Anything to bring everybody together like the good ol' days. Thoughts?

- Speaking of MSG broadcasts, here's what they're planning during the lockout. It's basically just creative packaging of archival footage. Part of me wants to watch, while the other part of me is sort of grumpy about basketball right now. I've watched bits and pieces of the '94 playoff games they've been airing, and I'll probably at least check these ones out until I start crying.

- In his newest lockout diary, Iman Shumpert is starting to sound pretty blue himself. Please, please, please keep your chin up, Iman, because you're the only thing getting us through these doldrums.

- Here's a Clyde-centric excerpt and photo gallery from Harvey Araton's newest Knicks book, When the Garden Was Eden.

- Mike D'Antoni, taking a break from coaching some babies, actually said a few words to the media yesterday.

"We don’t differentiate between a Rolls-Royce or a Yugo," he said. "We service all cars the same. Doesn’t the person in the Yugo want a clean car?"

Show me these people with Yugos. I want to see them and their Yugos.

- Today is Andy Rautins's birthday. You are invited for cake and air hockey at Andy's house at around 8 this evening. Everybody must leave by 10 because it's a school night.

That is all for now, children. Please do share any suggestions about game thread alternatives in the comments or via email. <3.