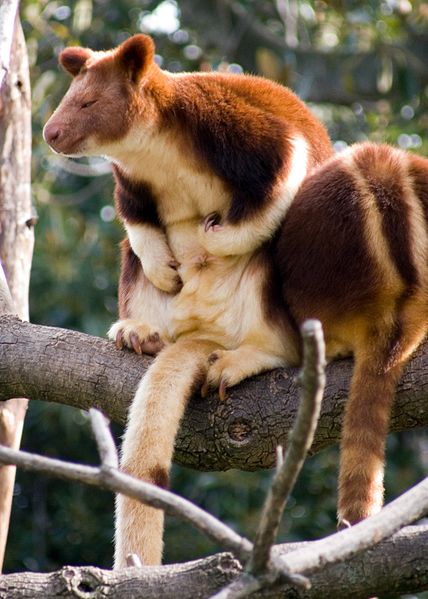 Good Saturday, bombardiers! On this most joyous of days, I have a few links to share with y'all.

- First of all, a sincere welcome back to all of you that disappeared during the lockout, and an especially sincere thank you to those of you who stuck around through all the gloominess my aimless ramblings about toast. I can't even describe how thrilled I am to get back to basketball.

- The tree-kangaroos (the ones pictured are the Goodfellow's species) are among my favorite animals at the Bronx Zoo. They live in Jungle World and there are two of them and they bicker constantly. Anybody feel me? I'm not sure why "tree-kangaroo" gets hyphenated, but it's fine with me.

- Here are some things twat by Alan Hahn:

Amar'e Stoudemire is looking to organize a minicamp for his Knicks teammates starting as early as this Thursday, sources told Newsday.

Amar'e-led minicamp, to precede training camp, likely to be held at IMG Facility in Florida. All expenses covered.

- Real training camp is scheduled to begin December 9th, which is also the day free agency begins. For the time being, it seems like we can expect the Christmas day triple-header schedule to remain as is, with the Knicks tipping off the first game of the season at noon against the Celtics. I'm already paralyzed with terror.

- That overlap of training camp and free agency is strange to me. What of last year's Knicks who are now free agents: Shawne and Shelden Williams, Roger Mason, Anthony Carter, and Jared Jeffries? I assume that some of those folks will return. Do they just sign at the stroke of midnight, then report to training camp that same day?

- Meanwhile, it's possible that New York will look for outside help, particularly at the center and backup point guard spots. With Josh Harrellson and Iman Shumpert on board (and Jerome Jordan still able to be reclaimed from Europe, right?), there's a decent chance that they sit tight.

- For those of you not on Twitter, Jared Zwerling compiled some of the Knicks' reactions when they heard the news. Shump's warmed my heart nearly to a boil.

There's much to discuss, and we'll get fully back into the swing of things on Monday. For now, we rejoice.