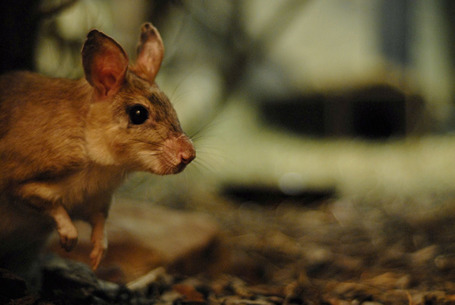 Evening, pinwheels. Let us return to those matters directly concerning the actual Knicks, shall we? Take the jump for some things to look at.

- Malagasy giant rats are just that: Rats from Madagascar that are, like a lot of things that grow up on an island with little in the way of large predators, quite big. They're the only extant species in a prehistoric genus and look kind of like rabbits. Madagascar is nuts, guys.

- With that, I should note that I'm going to switch from mammals to another life form very soon. I've exhausted most of Wikipedia's mammal photos, plus I'd like to learn more about some other species. It's probably gonna be reptiles. Just letting you know, since I know everybody cares very much.

Now, the word from the first day of the Knicks training facility being open:

- Carmelo Anthony and Toney Douglas, as expected, were the two Knicks to show up. One important bit of news, from Alan Hahn:

Excellent! That mostly erases that concern.

CP3 stuff aside, Melo says he's in the best shape he's been in years, looks lean. Now, back to more CP3 stuff....

- I wrote a post for The Sports Section today summarizing the Knicks' free agent calls to date, in case you're interested. By the way, Chuck Hayes appears to be out of the question already. Whatevz, Chuck. I always preferred Jarvis and Isaac and Rutherford B. anyway.

- Amar'e Stoudemire, who apparently lost a bet with LeBron James over the Duke-Ohio State game, did fifty push-ups as penance, which is roughly sixty more push-ups than I can do.

- ESPN did one of their 5-on-5 things about the Knicks, and they included a couple of the Knickerblogger bros and Jared Zwerling, which is a smart thing for them to do.

- This Katie Baker interview of Harvey Araton about his new book is superb. I guess I should probably get that book, eh?

That is all for now. Let us stay both pleased and pleasant, even amid all the rumors. The object of our rooting has become a moving target once again, but the lockout is over and there is basketball to be played and that is most wonderful.