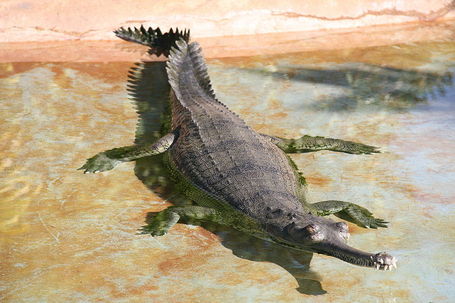 Morning, baby corns. I need to head out the door in a second, but I want to get some links up first. Take the jump for said links!

- Gharials are another top reptile jam from the Bronx Zoo. Imagine a crocodile, only with a snout that's just inches in diameter, except for a bulbous ghara on the tip (in males). They're awesome.

- J.J. Barea appears to have reached an agreement with the Timberwolves, so there goes that potential signing. If David Kahn's really willing to pay Barea for four years, then more power to both parties. The Knicks, meanwhile, are still sitting on that "room" exception. Unless Jamal Crawford's willing to take 'em (unlikely), I'd hand those 5 million dollars over two years directly to Shawne Williams. It's time to bring the poop back.

- Via my comrade Scott Schroeder (of Ridiculous Upside), the Knicks have invited Chris Hunter and Devin Green to camp. Hunter is the former Michigan and D-League big man who was in camp with the Knicks a few years ago. He's a big, strong fellow who put in some good games for the Warriors a couple years back. Solid camp competition for Jerome Jordan and Josh Harrellson. Green is the former Lakers swingman who's spent most of his career overseas. He has a very blurry Wikipedia photo, which leads me to believe that he's awesome and/or Bigfoot.

- Everybody came away from training camp this weekend with a "they're trying to make Toney Douglas the starting point guard" story. Here they are.

- Jared Zwerling's training camp notes are most excellent. Scroll down for his "practice observations", which include some good stuff regarding Iman Shumpert and Josh Harrellson.

- If you're still coming to terms with the Mike Bibby signing, I recommend this and this.

- TKB is hosting a "Knicks Jump-Off Party" on Friday night at The Hill (same place as the most recent P&T meet-up). I will be there, jumping off of stuff.

That's all for the moment, babies!