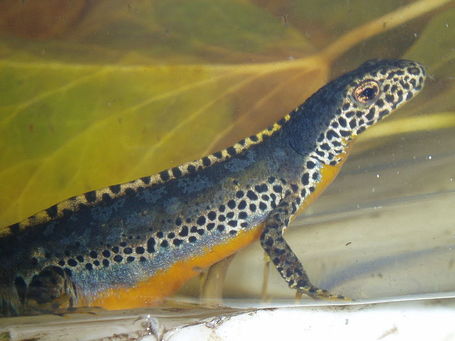 Good day, paladins. Welcome to my steamy dungeon of sex and links to relevant Knicks material. Take the jump for some of the latter.

- Alpine newts! Like, they live up in the forests and mountains of Europe! Amazing! Also, the males have a really cool pattern when in their "water phase". I want to have a "water phase" and spots and a yellow tummy.

- An item related to free agency before I dip into things that involve people actually employed by the Knicks: Woj just dropped New York into the list of teams interested in Reggie Williams, which I don't think we'd heard up to this point. Take the rumor for what you will, but if the Knicks are looking for a bit of scoring and entry-level ball-handling off the bench, Wiliams is a perfectly adequate alternative to Jamal Crawford. Still, no way of knowing how real a possibility this is (and how it relates to the pursuit of Crawford and/or Shawne Williams). I really hope everybody signs by the end of the day, because this is getting tiresome.

- In this article about Mike Woodson being the new designated shouter, Alan Hahn mentions a moment in practice in which Iman Shumpert got his shit sent back by Chris Hunter. You can hear Iman himself talk about it here.

- I'd just like to say that Shump and Josh Harrellson are now categorized as NBA players in the SB Nation auto-tagger and this makes me very happy.

- Tyson Chandler must have known the schedule was going to be tight, but he still kind of lost it when presented with the itinerary for the next few months of his life. You guys are sacrificing calves to the Basketball Injury Gods every night, right?

- Mike D'Antoni spittin' his usual "every coach is on a one-year contract" flow.

- Amar'e Stoudemire and Carmelo Anthony took a lot of shots last year and will continue to do so. Obviously, you don't want reliance on two primary scorers to undermine ball movement, but I'm not convinced that this is even remotely a bad thing.

And that is all! Hopefully, I'll have free agency news to pass along later. <3.