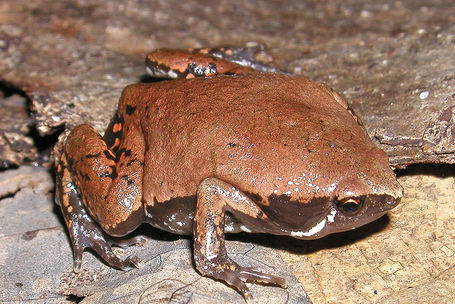 Good day, cellists! You're all looking splendid this morning. Except for you. You still have a little toothpaste in the corner of your mouth? Do you not look in the mirror before you leave the house? Good grief.

Take the jump for links.

- Sheep frogs! They don't look shit like sheeps (they kind of look like tiny pork chops? Maybe I should eat breakfast.), but they do make sounds like them!

- Now that the Jamal Crawford/Shawne Williams situation has been bungled, the Knicks need to look elsewhere for help. Steve Adamek argues that they need another shooter, and I agree. Then I think about frontcourt depth and see Ziller's list of remaining free agents-- including guys Leon Powe and Joey Dorsey-- and think that's a void that could be pretty easily filled. And there's always the weakness at point guard, which I'm gradually deluding myself into not worrying about. Point is: the Knicks need another guy or two.

- Our friend Jonathan Fishner, who rightfully chides the Knicks for the aforementioned bungling, casts his vote for power forward depth first and foremost. At the moment, I agree.

- Donnie Walsh, who I hope is delighting in all the free time he's got, is pretty thrilled with the Tyson Chandler deal, which totally validates all the feelings I've had over the last week.

- Also enjoying Chandler's company is Jerome Jordan, who finally got to practice yesterday and has much to learn from the man in front of him on the depth chart.

- Amar'e Stoudemire, in case you didn't see it last night, was unusually forthright about the Knicks' potential pursuit of Baron Davis:

"This guy's out for eight to 10 weeks, he's not our concern at all,'' Stoudemire said of Davis, who was waived by the Cavaliers on Wednesday. "We can't do anything about his injury. Right now we can't afford to have any setbacks. We have a positive thing going. We feel great about our guys. Everybody's healthy, so we've just got to keep it going.''

I wouldn't necessarily equate that to "Stoudemire Would Pass On Baron Davis", but still, one usually doesn't hear anything even resembling an opinion from Amar'e.

- Friend of P&T Robert Silverman, one of Knickerblogger's top bros, followed in the footsteps of his editor and got his first New York Times byline last night with a post about the news of the Tyson Chandler deal.

- That last link was to a piece by Alan Hahn, and it could be one of his last. Hahn's leaving the beat to do in-studio MSG stuff (as well as some blogging). His reporting, which was the sharpest and least perverted in the market, will be sorely missed, but I look forward to watching him on my television.

- Speaking of which, MSG is televising a Knicks practice starting at 11 AM. I'll post a thread for those of you somehow able to watch and, if it's at all interesting, I'll write up a little summary for those of you who actually do things at 11 AM on a Friday.

That's all for now! Look for that live practice thread to be up soon. Actually, let's just use this post as the thread.