Share All sharing options for: In case you missed "Knicks Training Camp Live"...

If you were at work or in class or in the sewer licking garbage this afternoon, you probably missed "Knicks Training Camp Live", MSG's live look at a Knicks practice. We got to watch the guys run drills, scrimmage, and bro out with commentary from our good ol' announcer friends (plus the new guy, Alan Hahn). I'll put some notes after the jump, but they've now put video online, so you can just see the good parts yourself. And by "good parts", I pretty much mean this:

Talking shit to Dan D'Antoni, Amar'e Stoudemire, and one of the circuit training stations? Lavishing over-the-top praise on his teammates? Speaking to himself (Shump-Shump) in, like, fourth person? I love Iman Shumpert. I just love him. Take the jump Shump for a couple other things.

- Clyde spent the lockout in St. Croix, as you'd expect. He "refurbished like three houses".

- The upshot from the rest of the "Mic Checks": Tyson Chandler is definitely an avid dispenser of advice. Amar'e Stoudemire is a dispenser of trite nothings like "Less mistakes!" and "We've got to work on these drills!". Landry Fields makes some corny-ass jokes.

- Mike Woodson, at least while we were watching, was the defensive coordinator. He was also the samwich meat while demonstrating...something on defense: 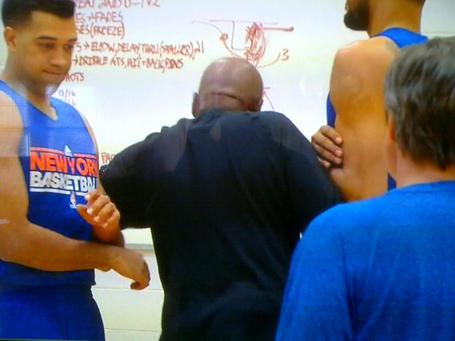 - Instead of gym shorts, Amar'e wore sweatpants rolled all the way up to his thighs so he could pay attention to "aligning" his quadriceps. I have no idea what that means but I believe him.

- I'd forgotten that Greg Brittenham is no longer the strength and conditioning coach. I can't figure out who they were talking about, but the announcers said that the new guy is a Marine.

- During a film session, Toney Douglas was seen wearing the biggest wrap I've ever seen on his right shoulder and arm. He looked kinda like Mega Man.

- Also in the film session, Woodson made a big stink about ball pressure and picking up before opponents cross half court.

- Clyde, reflecting on his own training camp experience, noted that they never did "all these little mediocre drills".

- Tina Cervasio recounted that Melo wouldn't tell her what the focus of his offseason training was. I'm assuming he honed his ability to control and direct static electricity with his hands.

- Landry Fields's jump shot form hasn't gotten any prettier, but we heard once more that he'd been practicing corner threes. After one long-distance make in the "Mic Check" segment, Fields turned and yelled "SHAAAA!". Toney Douglas was like "what?". It was great.

- Glen Grunwald could use some help matching his shirt with his jacket.

- Jerome Jordan, to my eye, looked better at moving without the ball than he did in Vegas two summers ago. He also got manhandled by Chandler a few times, which is a good thing. I totally buy into the notion that practicing against Chandler every day could do wonders for Jordan's game.

- Without providing details, Grunwald mentioned that Landry and Shump did some performance in front of the whole team at last night's Chrismas party.

- At least in these scrimmages, Iman Shumpert was definitely a shoot-first point guard. He didn't hit many of his jumpers, but nobody really did. That's how scrimmages go. These particular scrimmages were more about the defensive sets ("scripts") than the offense, anyway.

- Mike Bibby looked pretty sharp. It's readily evident that he's the most composed half court ball-handler on the team. Shump looked a bit rushed (like I said, he often just pulled up) and Toney tended to drift to the corners and diminish his passing angles. Again, I wouldn't read too much into it.

- Melo brought the ball up a bunch, too.

- Josh Harrellson scrapped for plenty of loose balls. This pleases me.

And that's all I've got! There'll be a replay on at 6 PM if you have MSG but weren't sitting on your couch at mid-day. If you do get the chance to watch, I'd definitely recommend it. There's not much to glean from the experience basketball-wise, but it's really a wonderful feeling to see these guys-- dormant for like eight months now-- actually do something on a basketball court.