Well, that didn't feel quite like basketball, but it felt a hell of a lot more like basketball than anything we've experienced in the last eight months or so. I'm not going to give this quite the full recap treatment because I'm hungry and it was a preseason game, but take the jump for some notes on moments and players of note.

- Clyde used two rhymes in the pre-game that I don't think I've ever heard from him: "No more stress, no more mess" (in reference to Carmelo Anthony's second season) and "rejuvenating and reverberating".

- Your undisputed player of the game: Renaldo Balkman. Humpty was excellent to the point of receiving "M-V-P!" chants in the fourth quarter. His 20 points led the whole game, and came primarily off really nice off-ball cuts to the rim and easy put-backs (4 o-bounds). I hadn't really thought of Humpty as a candidate for the regular rotation, but if he's ready to give this much energy on a consistent basis, he's a perfectly reasonable frontcourt option. He was much more useful on offense than, say, Jared Jeffries.

- Jeffries had some splendid defensive possessions, though: a couple drawn charges, some nice shot contests, and a few turnovers forced simply with active feet-shufflin'. That offense, though. Not good. He threw some hideous passes and got blocked by something called "Dennis Horner".

- Iman Shumpert looked much more comfortable handling the ball in halfcourt sets than Toney Douglas did. Neither made many great passes, (Shump did have one gorgeous feed to a cutting Balkman) but Shump at least kept his head up, maintained his dribble, and tried to penetrate some. Toney ended up with his back to the action far too often. The point guardiest play were all made by Carmelo Anthony, who made two pants-dropping look-away feeds to Balkman cutting to the rim (Humpty really did a lot of cutting!).

- (Douglas did run one excellent dribble-handoff-to-pick-and-roll play with Jorts. More on Jorts later).

- Other things we saw from Shumpert: Plenty of pull-up jumpers, including a few in transition; few jumpers (including a three) off the catch; a strip of Deron Williams and coast-to-coast lay-in (because off a bad take-off for which he just apologized); a few gorgeous splits of multiple defenders, including one that ended in a beautiful lefty finger roll. All told, Shump looked very active on defense, very confident on offense, and generally like an NBA player. I'd really like to watch him run more with the first unit (note that this is not a suggestion that he should replace Douglas or Landry Fields already) to see if his shot selection improves and he makes some ballsier passes. Overall, splendid first outing for Imana Shumpalot.

- One more thing about Shump: He's got such a distinctive dribble. He gets really low and it's almost like his arms are too long to keep the ball close without bending his elbows. Lots of side-to-side motion.

- Fields had his moments on defense and hit a couple jumpers, but did not look sharp. He got shook by Anthony Morrow quite a few times and didn't look even remotely improved off the dribble. So far, not so good, but let's give him some more time to get comfortable.

- On offense, Tyson Chandler set a lot of high screens and made some great cuts to find himself open or mismatched near the rim a number of times, but, again, Douglas was often too preoccupied with his own feet to find the big guy (Melo, for the record, ran a perfect pick-and-roll with Chandler). On defense, Chandler made some outstanding contests against Brook Lopez and made his presence felt a few times as a helpin' friend. He also sets some nasty-ass picks.

- Both Melo and Amar'e Stoudemire missed a lot of easy jumpers, but their spacing and movement off the ball was solid and more creative than anything we saw last season. There were lots of nice off-ball screens, most of which went undetected by whoever was handling the ball (Douglas). We saw a few instances of the "elbow" play with Chandler and Melo doing dribble hand-off things on the eponymous elbows and Stoudemire floating down near the rim. With repetition, that play could become deadly. Soooooo many options.

- Josh Harrellson looked pretty great! He came in and immediately drilled a three-pointer from the top of the arc (followed by the Blazer-esque three monocle celebration!), which we all totally saw coming. He also hit a very nice baseline jumper and just wrassled his way to a couple rebounds. I like Jorts, I think he's a rotation player, and I like him again.

- Incidentally, Shump and Bibby entered the game as a tandem a few times. They sort of traded off ball-handling duties.

- Marshon Brooks insisted that his jersey number be the same as his age, but they wouldn't let him take 8 1/2, so he rounded up.

- "Impractical Jokers" on Tru TV looks like it might be the worst crime human beings have ever committed.

- Clyde, discussing available free agents, with the line of the night: "What's happening with that Kardashian guy?".

- Kerry Kittles, sitting courtside, made the best "What can I say? Being a dad is nuts!" face of all time: 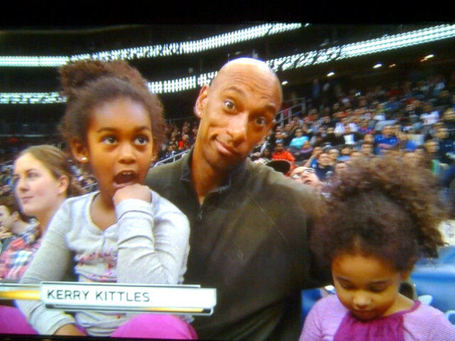 - The Knicks got badly out-rebounded. It's preseason, but I'd rather that not be the case. At least they did well on the offensive glass, I suppose.

All told, it was a happy first preseason game. Plenty of Shumping, unprecedented levels of Humptiness, and some great moments from Jorts and the frontcourt stars. It's a bit scary that we're now one game away from real life basketball, but I suppose that's the case for everybody. <3