After Chauncey Billups was waived under the amnesty clause to make financial room for Tyson Chandler, the biggest concern turned to re-filling that very point guard spot. After all, there's still doubt about whether or not Toney Douglas can run an offense and Iman Shumpert is cut from the same impure point guard mold.

Mike D'Antoni cleared up some of those concerns, saying that the offense would run through Carmelo Anthony, doing that whole point forward thing. That isn't ideal, nor is it particularly reassuring, but that's perhaps the biggest misconception about D'Antoni's offense. It doesn't require point guards so much as it requires playmakers. Whether said playmaker is 6'2 or 6'8 makes little difference. But with Douglas as the starter, in the first preseason game we saw the difference between Douglas' position and Melo's role.

Douglas struggled with a few different things out of pick-and-rolls during the first game, though I think they're all related to a lack of aggression. 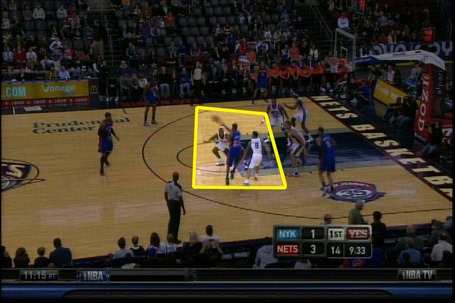 In the first clip, he successfully starts to make the defense collapse, but then kicks out before he penetrates the paint. This doesn't suck defenders in enough, allowing them to run back to their men. 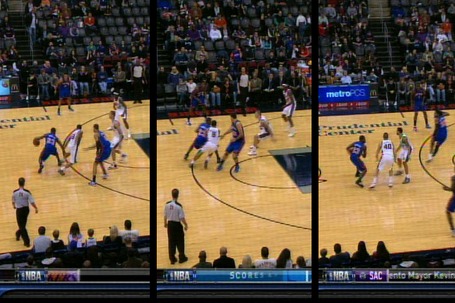 Douglas shows a lack of aggression in the next three clips. The second he turns the corner on a pick, he jabs in but then immediately pulls back and passes off without any real purpose. Worse yet, he gives up his dribble whenever the roll defender steps up for a light trap. 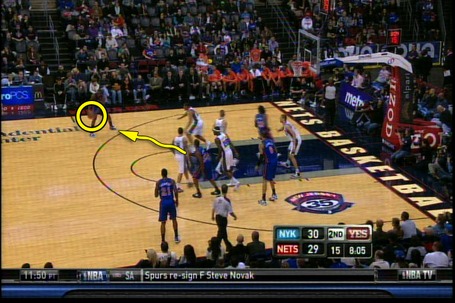 And when Douglas does hit someone for an opportunity, his passes aren't exactly thrown with great accuracy. You see the amount of space Amar'e Stoudemire's defender has to make up on this catch, but it's almost negated by the time it takes him to reach down for the pass before getting into his shooting motion. Even on Toney's best opportunity, Chandler fumbles the pass a bit which allows Brook Lopez the opportunity to time a block.

There was a palpable difference in the way the offense felt with Melo initiating the offense as opposed to Douglas, both in flair and effectiveness. For one, the aggressiveness. There's no hesitation in the way Melo attacks openings and everything else falls into place because of it. 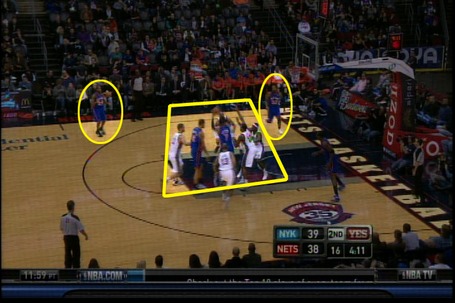 You see how quickly he attacks off Chandler's pick in the first clip and how he gets to the middle of the paint before deciding to give the ball up. He can choose to kick out with all five defenders collapsing on him or hit the cutter for easy money. The latter is generally more exciting. 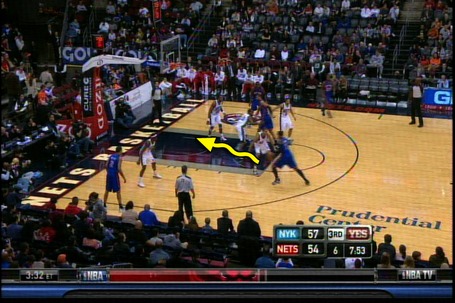 The third clip is something we expect to see. Melo gets Lopez to switch off the pick, which he sees as a mismatch, and rightfully attacks the basket. Even though he gets his shot pinned, he's not just pulling up for his favorite midrange shot. 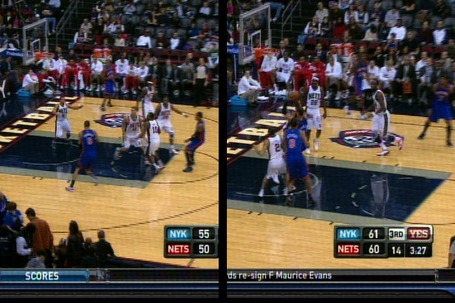 And the passing accuracy off screens is there, hitting Chandler perfectly in stride for a dunk, and again getting him the ball a foot from the basket.

Of course, running the offense is more than executing pick-and-rolls effectively. It's understanding what the defense gives. It's calling the right plays and knowing when to break from them. It's making sure everyone's in the right spot. And a whole heap of other things we'll never understand. But from pure feel and ability, the Knicks need to run it through Melo right now.