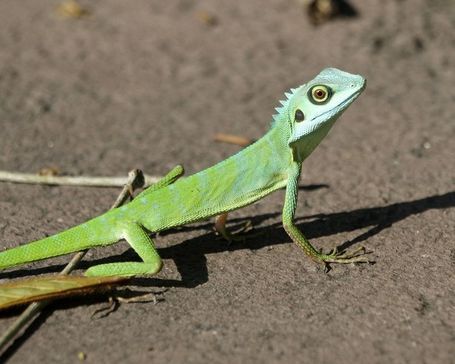 Good morning, dental hygienists! I hope you all had restful nights of sleep and are happily humming away at whatever it is you do on Wednesday mornings. If you'd like to take a break from said humming, here are some links.

Oh, you'll have to jump for them. You know how this works.

- First of all, yes! We're doing reptiles now! And amphibians. Also, probably not very many snakes except for the coolest ones. Green crested lizards seem cool, no? They live in Southeast Asia and fall into the agamid "dragon lizard" family. They turn from green to brown to blend in when threatened. I'd like to touch one.

- Okay, links. BOOM. Here's an interview HoopsHype did with Bostjan Nachbar following his workout with the Knicks. He and Mike D'Antoni go way back, so don't rule this guy out. Also, he had some decent stretches for the Nets and people call him "Boki". I wouldn't be opposed.

- Fuhry already has a nice Josh Harrellson thread going, but just to get it on the front page, check out the products of his media availability via Berman and Zach Schonbrun of Newsday. Count me among those who (perhaps irrationally) think this guy is going to be a contributor. I just feel it.

- Some things other people noticed about the schedule: 19 back-to-backs, Magic in town for the MLK Day matinee. No five-games-in-six-nights stretches (via Steve Adamek!). Relatively rough quality of out-of-conference opponents.

- Did any of you watch LaLa's Full Court Life? Well, it's getting a second season, so that might be good news if you answered yes to the previous question.