Berman: The Knicks are sending Ronny Turiaf to the Wizards. (Updated at 11:40 PM)

Share All sharing options for: Berman: The Knicks are sending Ronny Turiaf to the Wizards. (Updated at 11:40 PM)

According to source, #Knicks finalizing trade for Ronny Turiaf to Wizards tnt which will create enough cap space to make Chandler official.

It does not appear the Knicks would receive anything in return and will likely have to give the Wizards cash to pay for part of his pact.

Looked for a second like this was in jeopardy, but trading Turiaf was the last thing standing between the Knicks and a full training camp with Tyson Chandler and company.

So very sad to see you go, Ronny. You were a productive Knick and a constant source of entertainment. May your time in Washington be healthful, fruitful, and fine. I've come to the conclusion that you were always meant to be a Wizard (and a Wizznutzz, at that). Behold: 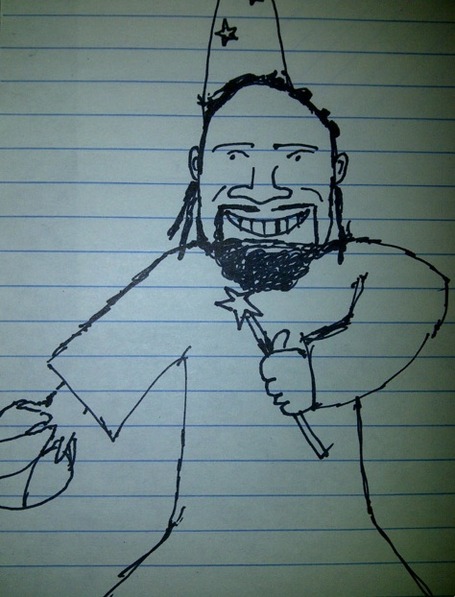 Thank you and farewell, Ronny!

#Knicks will have the new half MLE ($2.5M/3 years) to use if they so desire to add another player, or go with vet mins.

Extra E, on the other hand... (perhaps not for all of the above money.)