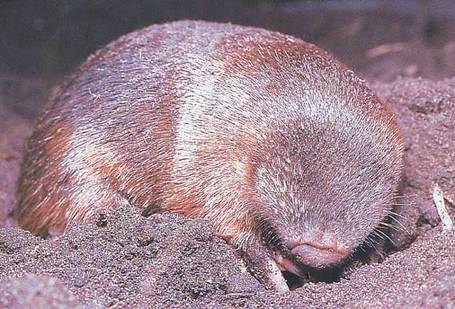 Good afternoon, wagons. There are quite a few Knick things worth reading today, so let's get right into it. Jump the jump for links galore.

- Golden moles (not a single species, but an entire family of mammals) have little eyes, but they're totally covered by mole fur. They just squiggle around underground and dig toilets to poop in.

- Will's letting me do the Knicks Power Rankings now! This week's just went up.

- This is a few days old, but Kevin Clark of the Wall Street Journal explains how the Knick defense is built on hyper-aggressiveness and gambling, with plenty of useful quotations from the people that make it happen (and go up against it).

- Raymond Felton probably won't be an All-Star, and he's okay with that. If anything, he could use the rest.

- Meanwhile, Knickerblogger details how Felton is no longer playing at an All-Star level anyway.

- More from the WSJ: Jeff Pearlman is the latest to profile the magnificent Landry Fields, extracting the Landriest line of all time in the process:

"Almost every morning me and [fellow rookie] Andy Rautins hit up the Atlanta Bread Company for breakfast," he said. "Then we shop at Nordstrom Rack—that place is awesome. Brand names at half the price. There's also a Barnes & Noble, just in case we want to get our read on."

"GET YOUR READ ON!" needs to be put on an elementary school poster immediately. Like now.

- Howard Beck reminds us that, despite all he's done, Donnie Walsh's contractual situation is still hanging in the balance. Walsh, of course, is cool as a cucumber about the whole thing.

- By the way, from that same article, Mark Warkentien will be named "assistant to the president", which was Allan Houston's old gig.

- Kelly Dwyer sees all of the above and marvels at how media-friendly (not in the "friendly to the media" sense, but in the "there's always some weird shit to write about" sense) the Knicks are. The fact that they're a competent team makes it all much easier to handle.

- Alexander Chernykh (who makes me wish I had an "NYK" in my name) translated another Timofey Mozgov piece for us (an interview this time, not a blog post), and this one includes some remarks on Sunday's breakout performance AND stuff about his tussle with Robin Lopez. It's magical. Here's a selection:

Yes, it was a nightmare. I got two fouls, made a terrible shot and committed a turnover. Amare came to me and tried to make me calm down, but I only had a single thought in my head: "It’s over, Mike is going to bench me now". But he didn’t say anything and I rushed into battle again. I attacked the rim and missed! I rebounded, attempted another shot and missed again! Another rebound, my third shot, and another bad miss!

But from there I got really angry, and from that moment everything started to fall in its place. It was like all my countless misfortunes came to an end. After that I almost didn’t leave the court and made 9 of 11 shots and five free throws.

- Wilson Chandler will probably play against the Mavs tomorrow. This is well news.

- BREAKING: Danilo Gallinari got hisself an iPad and Landry Fields won't win Rookie of the Month this month.

That's all for meow! Enjoy your afternoons and tread carefully. It's slippery out there.