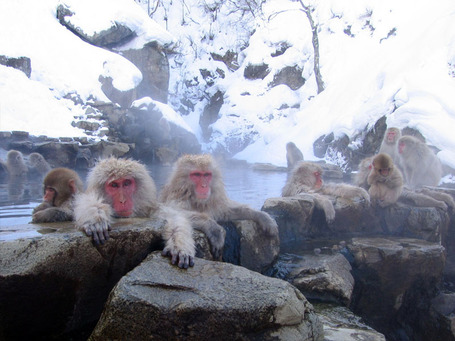 Good afternoon, cupidim! Love is in the air, and links are in the air, too. I caught a few for y'all. Take the jump.

- Gian requested that today's mammal be the Japanese Macaque (or "snow monkey"), and I was more than happy to oblige. If you're unfamiliar with these bros, here's a little introduction. Yes, they bask in natural hot tubs in the mountains of Japan. Yes, that's awesome. Yes, you can watch them do this at the Central Park Zoo.

- Knicks things I made: A list of the "Landriest" Landry Fields moments at SBN NY, and a recap of the weekend that was.

- The Knicks discuss their superstitions. Most of them don't have any. Danilo Gallinari apparently does something unspeakable when he passes an ambulance in the street. I NEED to know what it is.

- Walt Frazier, who has been interviewed roughly one trillion times this season, answers some questions for The Daily Intel blog. There's some good, new stuff in there. For instance:

What's your drink?
White wine. I like it because I could drink it and was still able to perform in practice the next day.

How often do you prepare your own meals?
Every day. I make a lot of fish — swordfish and salmon steaks, usually with fresh vegetables — carrots, broccoli, salad. I’m a healthy eater.

- For the record, Wilson Chandler says the trade rumors don't affect him. "No kind of way."

- Knickerblogger is partway through a countdown of the top ten Knicks All-Star moments.

- Another comprehensive piece on the Carmelo Anthony rumors, but this one has much less of an agenda than most.

- Ben Kopelman of TKB asks a worthwhile question: How do you feel about Amar'e Stoudemire playing in the All-Star Game with his sprained toe?

That's all, friends. Enjoy your Valentimes. I love each and every one of you.