Carmelo Anthony and Chauncey Billups came to their press conference dressed in warm up gear. That should tell you all you need to know about how little time the newest Knicks received to learn the offense. Mike D'Antoni and crew had to have instructed the players to work off instincts and habit. In fact, Billups was specifically told to "just do what [he] do" (DWCBD?).

Melo naturally played how he was most comfortable - through isolation. And once the initial pain wore off, we witnessed the realization of pre-trade fodder with two offensive talents complementing each other rather than clashing. Or at least the beginnings of it. The game was Aubrey Plaza. The offense was awkward and uncomfortable at first but you were laughing and smitten by the end.

The two clips show just how poor the spacing and communication were initially. In the first, Toney Douglas and Shawne Williams occupied the same ten feet of space as Anthony. They both eventually cleared out but the play resulted in an offensive foul (that had every bit as much to do with Luc Richard Mbah a Moute's fleet of foot) that sent Melo to the bench with two early calls. 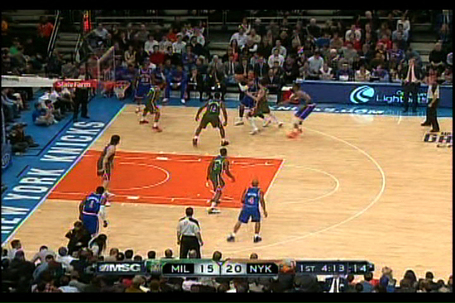 In the second clip, we saw something we'll grow tired of over the next half decade. Melo isolated against three defenders, jab stepped and missed a 20 footer while teammates failed to cut to the open space. 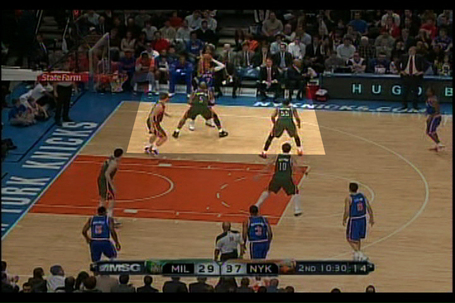 But it got better.

On this play we started to see a few positive things. Notice that it was the starting lineup we expect to see henceforth with both Amar'e Stoudemire and Ronny Turiaf in the game. I have reservations about how the team can keep spacing with this unit but they made it work tonight. 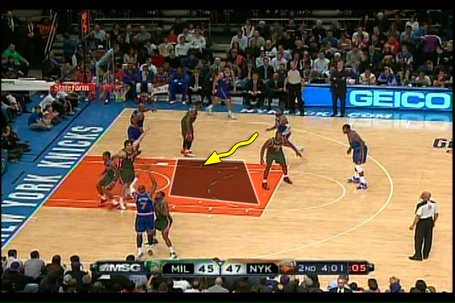 The Bucks chose to defend Melo's isolations with Andrew Bogut playing off his man, zoning behind Melo's defender to protect against the drive. This obviously isn't anything he or the Knicks haven't seen before as it's become a common method of defending the basket in recent years. And with Mbah a Moute rightfully focused on Amar'e, Ronny curled behind him and cut to the vacated area for Melo's feed, his "only" assist of the night.

When the Knicks inevitably went small to close the game, we started to see how the threat of Melo affects Amar'e off the ball.

As the Bucks continued to zone out with Bogut, Amar'e got the unfettered step he needed to get to the rim off the pass. On the first play, with Mbah a Moute frontin' and Bogut chillin', Billups hit Amar'e directly. On the second, Bogut's systematically out of position again and Amar'e nearly guts a fish. Four free throws, four points for a player benefiting from the attention Melo received.

The Bucks finally abandoned the Boguzone, as Amar'e consistently scored with off the ball movement. This gave Melo the freedom to attack a weakly contested rim. 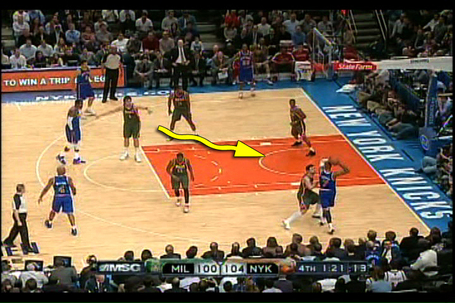 No big man has the quickness to cover that much ground. And the smaller lineup was able to take advantage of the other mismatches. Melo really has nothing to fear with Brandon Jennings under the basket.

Against this defensive strategy specifically, Melo showed no difficulty or reluctance in finding the open player. He only recorded one assist but you see how his threat alone added a different dynamic to the offense. He "created shots" for others. That was the focus of a large segment of the statistical debate regarding Melo. His average scoring efficiency is now widely known but - not to sound like I'm pitching Cialis - studies have shown that his teammates' efficiencies improve playing alongside him.

Remember the question marks around Amar'e's performance sans Steve Nash to start the season. They've been silenced since but Amar'e's still having one of his least efficient seasons with a true shooting percentage of 57% (down from his career average of 60%). But in his first game with Melo, he went for 19 points on 13 shots with 7 trips to the line. As evidenced above, with the way he was set up, I don't take that to be coincidental. What does this do for his production now that there's another primary ball handler? One who's an equally feared offensive threat? At the risk of hyperbole, flashes of it were revealed last night.