Share All sharing options for: Knicks Trap the Heat Ball Handlers on Screens

After the game, writer and joke bro, Jared Wade, said, "I always knew Amare and Melo were going to win with defense." Sarcasm aside, we were all equally surprised at how well the Knicks clamped down on the other side of the ball for key stretches in their win over the Heat. The Free Amigos came into the game with the fourth ranked offense, and after putting up 34 in the first period, it started to look like the typical affair. The Knicks, though, closed the second quarter on a 16-0 run with fine defensive play, then turned it on again in the final frame to split the season series. In the fourth quarter particularly, their strategy was to trap the Heat ball handlers on screens.

Here, Dwyane Wade opted not to use the screen and drove left to attack the empty space. Amar'e Stoudemire recognized it and provided help to trap him in the corner with Chauncey Billups. 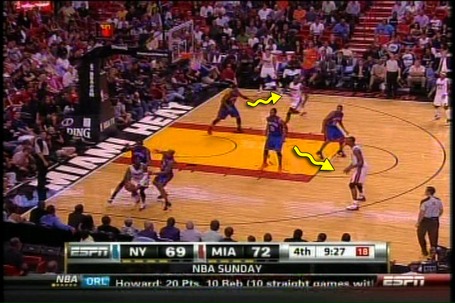 The trap forced Wade to pick up his dribble and he swung it over to Amar'e's original man, Chris Bosh. Shawne Williams already rotated over to cover as Bill Walker picked up Joel Anthony's cut. Bosh rightfully threw it to an open Mike Miller but the pass was wide.

In the first clip, the Knicks trapped Wade and forced him to pass out to Bosh again. 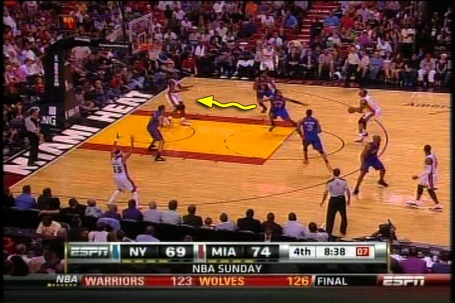 Ronny Turiaf was caught between running out to contest Bosh or retreating back to an open Anthony. Bosh couldn't make him pay.

On the second clip, LeBron James gave it up to Bosh after being trapped by Amar'e and Extra E. Bosh hesitated as Billups closed, though, and passed out to LeBron who missed a three.

Here Billups and Amar'e trapped Miller in the corner who gave it up to Bosh (common theme developing). 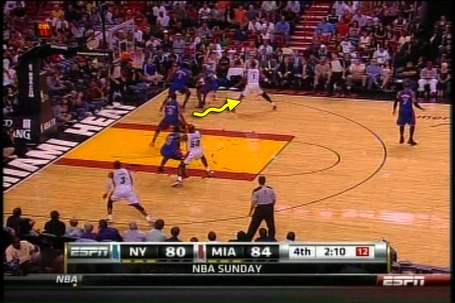 Williams rotated over before Bosh could make a move, though. Walker alertly got his hand in the passing lane then helped force a tough shot for Wade.

The decision to trap was effective in getting the ball out of Wade and LeBron's hands. It was a bigger risk with LeBron given his passing ability but the Knicks rotated much better than they have in recent weeks to cover themselves. What it did was force Bosh to be the decision maker from the perimeter which is a compromise given his shooting ability, but the results in these cilps were three missed field goals and a turnover. And while the trap was executed properly, it would've been for naught if it weren't for quick, smart rotations from Shawne Williams and company.