Chauncey Billups' Decision on the Block

Share All sharing options for: Chauncey Billups' Decision on the Block

Just before the Amar'e Stoudemire's game-sealing block of LeBron James, ESPN showed a replay of the Heat-Thunder game a few weeks back where LeBron passed to Eddie House for a game-winning three. House got free because his man came off him to contest LeBron. In last night's game, Chauncey Billups had the same decision to make.

The play was certainly designed for James to drive with House in the corner for spacing. Billups opted to stay home on the shooter, though, and made James commit to the drive. The rest was beast-mode. 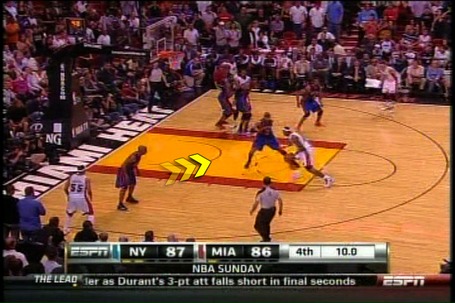 On Thursday night against the Bulls, Dwyane Wade provided help off Luol Deng on the same late-game play on a Derrick Rose drive and Deng buried a three. Here, Billups would've been there to contest the shot.

It's difficult to know if this was the strategy coming out of the huddle. I imagine it's instinctive to provide help for your teammates on a drive so maybe it was decided beforehand. Whatever the case may be, for as much athleticism as Amar'e showcased on the final play, it was also largely affected by a man choosing not to move at all.