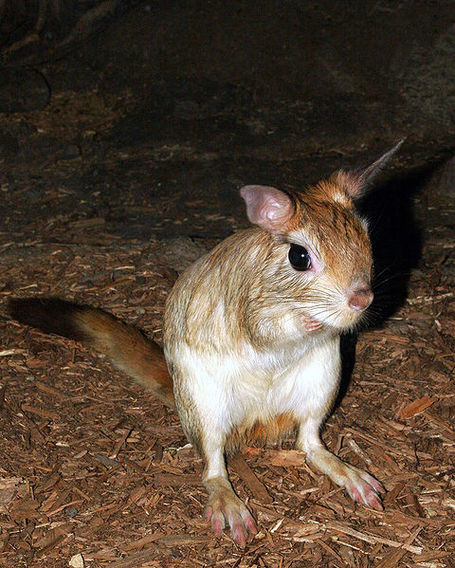 Good afternoon, humps. The Knicks have an off day before their home-and-home with the Sixers tips, so why don't we do what we do best and devour links?

- Springhares are little rodents that look like a cross between a squirrel, a rabbit, and a kangaroo. I think you'll like them very much. I think they'll like you, too.

- I love-- LOVE-- the way that Donnie Walsh is dealing with the recent media queefing over his contractual status. He is, as always, cooler than a polar bear's toenails and delightfully dismissive:

Walsh went on to add, "I don't believe any of it" regarding the reports that Knicks owner James Dolan is not certain he wants to bring Walsh back and, of course, the fears that Isiah Thomas still has Dolan's ear and may try to push Walsh out and reclaim his position running the franchise.

"The one thing I do know about Jim Dolan is he's honest," Walsh said. "So I don't believe any of this stuff. I think he'll deal with me honestly . . . So I don't have any problem with anything, period."

YURP. If and when Walsh does leave the Knicks, I'm hiring him as my grandpa/sensei.

- That said, Walsh should obviously be extended. He's too much of a gentleman to campaign for himself, but that doesn't mean we can't.

- Jeff Fogle of HoopData delineates exactly how suckily the Knicks suck at rebounding. A key point:

If you're getting killed on the boards, opponents get extra chances to score on their possessions, while you're not getting those on your possessions.

- Akis of Sactown Royalty does a cool thing each year where he asks bloggers of other teams (such as m'self) how they'd like their team to do business with the Kings. I figured we could swipe a rebounder or two.

- More from Mr. Hahn: Discussing how the Knicks don't feed Danilo Gallinari enough and how they totally should. It's similar to some of the conversations we've had here, only there is more direct quotation and less use of the word "cock".

- Hey! It's great to see that our Russian-translatin' bro Alexander Chernykh is getting some love from the papers. Alexander's decoding of Timofey Mozgov is a dark horse candidate for MVP this Knicks season. If you haven't already, check out his translation of Timo's post-masterpiece blog post. It's really interesting stuff.

- This isn't Knicks related for the time being, but Sebastian Pruiti is now doing a weekly thang for SB Nation and that is very, very excellent.

- I still haven't put together an hour to listen to the new DoC, but that doesn't mean I shouldn't share it with y'all. That would be selfish.

That's it for now! Enjoy the rest of your day and try not to walk directly under any snow that's ready to slide. You have no idea how many roofalanches I've seen today.