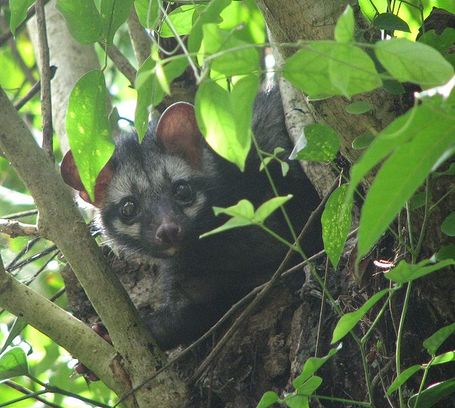 Good afternoon, rubbermaids! The Knicks don't play again until Wednesday, so we've got some time to meander around the internet. I've got some links and South Asian carnivores to share with y'all, so let's jump.

- Today's mammal is the palm civet for a few reasons. For one, I've never done a civet species, which is absolutely silly. For two, I've been reading about Bhutanese wildlife a lot lately, and these guys like to hang out in Bhutan sometimes (and I've already done the takin). For three, somebody domesticated a palm civet and named it "Teemo", so this is totally Knicks-friendly. Anyway, civets are representatives of the family Viverridae, which contains all the vaguely catlike tree friends that hang out in Africa and Asia- civets, genets, binturongs, and linsangs. It's one of the more baller families. Any of you South Asian P&Ters every see any cool animals?

- Amar'e Stoudemire definitely needs to lock it up a bit, but last night's 14th technical for skipping was a bit much. Mike D'Antoni spoke up in defense of his co-captain:

"To me, I don't know how you play the game without any emotion whatsoever," D'Antoni said in reaction to the zero tolerance this season on visible displays of emotion after foul calls. "I don't see how you do it. He's gotten penalized for it. The guy never curses and [his reactions are] never overly-done. If he was my son, I think he acts pretty good. So I don't know, I don't get it.

"It's an emotional game," he continued. "I would rather players play with emotion. And if that means he's going to get suspended, then so be it. I'm definitely not going to be critical of him."

Click through on that one for some nice stuff regarding the camaraderie between Landry Fields and Andy Rautins.

- Meanwhile, Fields had one of his best games yesterday and is looking forward to the rookie-sophomore game, where he will be "coached" by Amar'e Stoudemire.

"I just told him that he better give me the ball every time, or when we get back to Knickland I'll never give him the rock," Fields said. "But it will be fun."

- I see there's already a thread up denouncing Tom Ziller's piece on Donnie Walsh. I guess that's to be expected, but here's how I took the post: While Ziller probably understates exactly how miraculous Walsh's transformation of the Knicks, one of his main points is that we're a bit prone to lionizing Donnie simply because he isn't Isiah. I think that's fair, and I also think that our fear of losing Walsh is based primarily in the fact that we haven't known a single other competent GM in a decade or two. When Walsh departs (whether it's at the end of this contract or the next one), it'll be kind of scary to see who replaces him. Either way, the Knicks fan in me thinks that Ziller doesn't quite grasp how marvelous it is to be .500-ish right now, but he's got a point that there are other great GMs out there besides Walsh. Whether or not we trust James Dolan to find one is the issue.

- Interestingly, Walsh isn't the only front office bro with an expiring contract. According to Frank Isola's "Knicks source", Mark Warkentien is only on the books until July 1st. I don't know what to make of that.

- While doing research for summin' else, I stumbled across this. Since I already nauseated my Twitter followers with it, I figured I'd pass it along here, too. Warning: it's NSFW (where "W" stands for "wanting to spend the rest of your day without having violent Frederic Weis flashbacks.)

- Jared Zwerling interviews Spike Lee, who gushes about Landry Fields (and pimps a really awful nickname for him) and also shares some personal experience with the typhoon of douchebaggery that is Kevin Garnett.

That's it for now, children. Be well and beware falling ice.