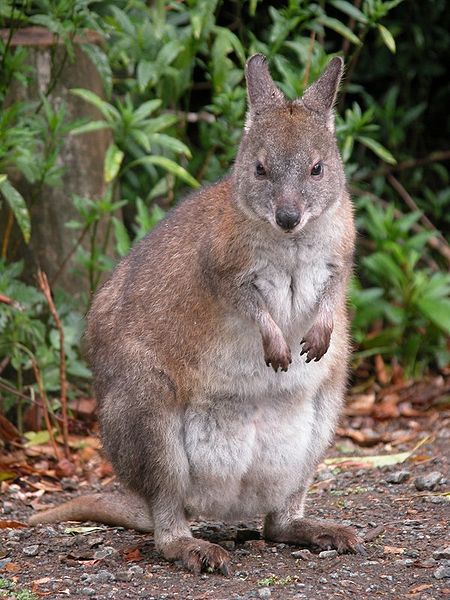 - Do you like kangaroos but wish they were shorter and fatter? Yes? Might I interest you in a pademelon?

- So, aside from the rumor that the Lakers are now in the market for Carmelo Anthony (Cool.), today's morsel of intel is that James Dolan has apparently wedged himself into the Knicks' own Melo courtship. Josh Alper's and Joe DeLessio's responses are worth reading. I'm just scared of Dolan.

- Amar'e Stoudemire's most recent technical was definitely unwarranted and, as expected, the league struck it from the record. He's now back to 13.

- Meanwhile, Marc Berman's guy with the Rockets said the Aaron Brooks thing isn't happening. Oh, what a magical moment it will be when the trade deadline passes.

- A Knick possession in super slow-mo. I enjoyed it way too much.

- Zach Harper's "Exercise in Scouting" at Hardwood Paroxysm isn't directly Knicks-related but it's a worthwhile reminder that you and I and the rest of the non-athletes at their stupid little computers don't really know very much.

- Landry Fields would vote for Blake Griffin for Rookie of the Year, which is like the Landriest thing I've ever heard.

- Here's something to appease all you Posters and Toasters who constantly bombard me with emails requesting Youtube videos depicting the stats of the 2000-2001 Knicks set to shitty ambient music. There are dozens of these for all different years. You're welcome.

Them's the links, children. Hope you found something in there that improved your day by at least a tiny margin.