Knicks Show the Goods and Bads on Defense vs Grizzlies

Share All sharing options for: Knicks Show the Goods and Bads on Defense vs Grizzlies

There's been work done recently highlighting the Knicks' improved defense with Jared Jeffries back playing free safety. More of it was on display last night against the Grizzlies as the Knicks started the third quarter in their patented Box-and-Jared which held the opposition to five points in eight possessions. Coupled with an eruption of buckets on the other end, the team pushed ahead to a double-digit lead and a fitted swag. As with all facets of their game, though, sustained defensive prowess continues to be a work in progress and it suffered some lapses late. Here's the good and the bad.

The Grizzlies love to run high-low plays between Marc Gasol and Zach Randolph. It's great because Randolph is a jerk on the block and Gasol's height and passing ability make entry passes all too easy. Last night, the Knicks were able to eliminate it with the zone by surrounding Gasol around the free throw line and fronting Randolph in the post. 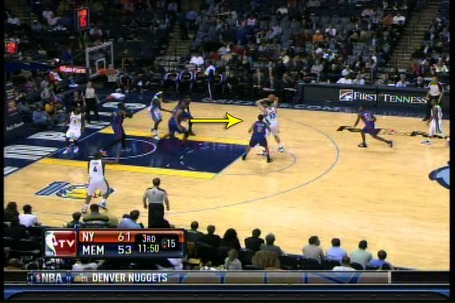 Here Landry Fields covers Gasol on the catch and Jeffries fronts Randolph while remaining in position to rotate onto Gasol.

Gasol opts to drive and Jeffries gives his body up for Lent.

This time the Knicks use the Triforce to surround Gasol. 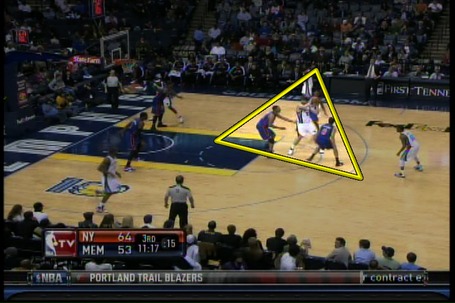 He immediately passes out to Sam Young. The Knicks shift the zone and Jeffries is in position to help Carmelo Anthony front Randolph or cover Gasol. 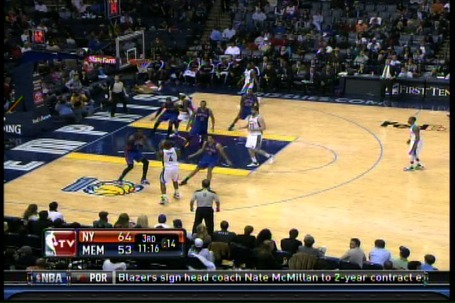 The ball swings around a few times but the possession eventually ends in a jump shot for Young, perhaps the least palatable option for the Grizzlies.

After a timeout, the Grizzlies try to get the entry pass in from the perimeter instead. Jeffries is in position to front Randolph again, though. 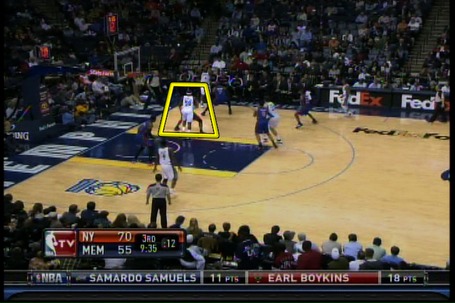 The ball swings out to Tony Allen who's forced to create. With Melo there, Jeffries is free to step up on the drive. 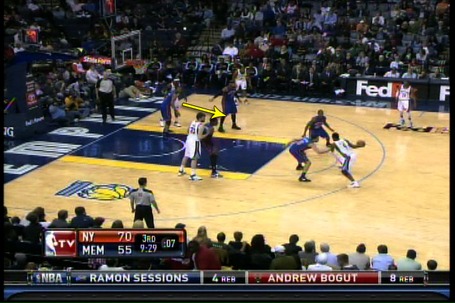 Play ends in another offensive foul.

Some lapses occurred in the fourth quarter, though, as the Knicks switched to man defense and were confused on rotations.

Here Shawne Williams is preoccupied with the off-ball screen and has his back turned to a driving Mike Conley. 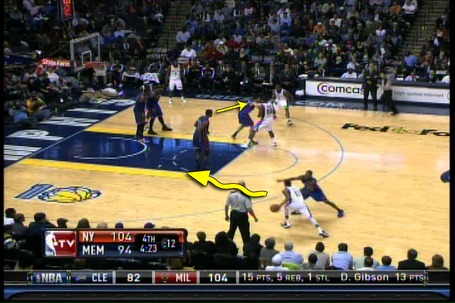 Amar'e Stoudemire can't make up the ground in time and the Grizzlies get back to within single-digits.

With Jeffries back in the game, the Knicks properly prevent a side pick-and-roll between Conley and Randolph. The mix up is between Melo and Fields who both decide to rotate out for a possible kick. 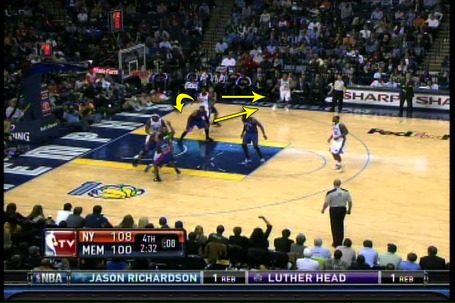 That leaves Tony Allen free for a layup. He misses but you expect everyone to make that shot.

The game shouldn't have come down to the wire considering the Knicks had a 10 point lead with three minutes remaining but it had more to do with turnovers and wasted possessions than defense. The team continues to play with its strategy but there's already a solid foundation with Jeffries roaming as he sees fit. His instincts lead to good decisions and he covers a lot of ground to protect his teammates. Lapses will continue to happen given the personnel but there's time to improve on awareness and communication.