Honestly, if I had written this recap immediately following tonight's Knicks-Grizzlies game, it probably would've amounted to a longer version of the LatrellSprewell game thread comment quoted above. This game defied subtlety from start to finish. It broke down into a few distinct chapters, each worthy of bouts of visceral keyboard bashing, both ecstatic and frantic.

First, there was a lengthy stretch of defiant, absurdly efficient shooting. Despite almost zero trips to the foul line and a heap of turnovers, New York built its lead in each of the first three quarters with preposterous accuracy from every range. Next came a sudden regression to the mean, with a nearly five-minute drought to open the fourth. After a flurry to pull back ahead by double digits, we witnessed what thankfully wasn't the night's final act: a plunge of Icarian velocity. Mike D'Antoni called a timeout to talk things over with 3:08 remaining. Goodness knows what was said, because the ensuing 3 minutes and 7.5 seconds contained little to no passing, three turnovers, four horrid misses, two Grizzly blunders left unexploited, three shooting fouls (two of which were and-ones), and, in sum, a 10-0 Memphis run to delete all of the Knicks' work up to that point.

Thanks to Carmelo Anthony, there was one more chapter of the short and sweet variety. With 14 seconds remaining, the Knicks brought the ball up the floor, found Melo on the left elbow, and watched him drill a one-dribble fadeaway from the isthmus of hardwood between the Memphis bench and Tony Allen's outstretched arm. Jared Jeffries foiled the Grizzlies' half-second lob attempt, the Knicks emerged victorious, and we kept right on QWERTY-pounding. Seriously, I'm not sure whether we set a P&T high for comments in tonight's threads, but we almost definitely obliterated the record for capital letters. Be it gleefully or in blustering rage, most of the night's proceedings demanded exclamation.

Now that I've had a few hours to vibrate, let's look at some of the details.

- First of all, the game's most incredible stat: New York won despite shooting and hitting just four free throws to Memphis's 33 of 35. That's never happened, at least not within the time span of B-Ref's database (thanks to bluecheese999 for that bit of research). Part of that can be attributed to a few missed calls here and there, but it was mostly a product of New York thriving despite very little aggression. Until the fourth quarter (that's going to be a recurring qualifier in this one), the Knicks pushed the tempo, passed the ball brilliantly, and drained their open shots. In doing so, they somehow got away with minimal contact drawn and so, so many Memphis steals.

- There's another theme from the evening (and another number to contextualize the sheer ridiculousness of New York's shooting): steals. Lionel Hollins, who I quite like, has these Grizzlies gambling and pickpocketing as successfully as I've ever seen at this level. They just torched the Knicks on that front. It wasn't just known steal-mavens like Mike Conley and Tony Allen, either. The likes of Zach Randolph and Sam Young got in on the larceny, and managed to do so without fouling. It seemed like every single exposed dribble or telegraphed pass got snaggled, and the numbers pretty much back that up. Memphis forced 16 turnovers, 13 of which were steals.

- So, all together, the Grizzlies lost a game in which they shot 54% from the field, hit 33 free throws, and forced 16 turnovers. Unless I'm missing something, that's never happened either. (See the first two comments below. I'm a fool.) How did the Knicks make history like that? Well, they shot 60% through three quarters, 53% for the game, and, most importantly, attempted and converted a ton more three-pointers than the Grizzlies did. Memphis hit three treys on the evening. The Knicks did that in the game's first three and a half minutes. They went 12-24 on the evening, with Toney Douglas (4-8), Carmelo Anthony (3-5), Landry Fields (2-3), and Roger Mason (2-4) all finding the range. New York grabbed some o-bounds and forced 16 turnovers themselves, but that shooting appears to have pretty much been the difference.

- And it would have been a big difference if it weren't for that hideous fourth quarter. Excepting that solid stretch in the middle, New York just laid an egg in the final frame. On offense, they stopped running, stopped moving the ball, and stopped making shots. On defense, they helped infrequently and fouled like madmen. Even against reinvigorated Grizzly defense, I have no idea how or why they suddenly went to sloppy, isolation basketball (Douglas, Stoudemire, and Anthony being the main perpetrators, to my eye) and spewed forth a 14-point quarter after three rounds of 30-plus, but I do know that my scalp's still sore from all the hair-pulling.

- It's becoming difficult to predict who will kill the Knicks on any given night. Marc Gasol had just 12 points in this one and Zach Randolph was pretty quiet until the fourth quarter. Instead, it was Tony Allen and Darrell Arthur (22 and 21, respectively) who beat New York, primarily on easy inside looks off cuts and fast breaks. Arthur alone went on a personal 8-0 spree to chop the Knicks' lead to open the fourth.

- This was another one of those games in which Carmelo Anthony was distributing early, then looked to create for himself more as the game progressed. For the most part, it worked. He went 12-24 from the field, including the aforementioned three-point accuracy, and hit all four of New York's free throws (that stat still numbs the frontal lobe). Amar'e Stoudemire, meanwhile, drove and banged bodies more than his 0-0 free throw shooting might suggest, but earned a big chunk of his 26 points on jumpers. A 13-22 line tells me that that's quite alright. As far as synergy goes, I see two Melo-Amar'e assists, but the only compelling exchange between the two that I took note of was a sharp play in which both were on the strong side and Amar'e dribbled across the lane to drag the D a little, then whipped a gorgeous pass over his shoulder to Melo, who spun to the rim for a pretty finish. Obviously, even without directly feeding one another, both are finding shots to their liking in the halfcourt set. This pleases me.

- Anthony, by the way, hit a jumper on either the last or second-to-last possession of each quarter. This also pleases me.

- Amar'e for his part, earns the Malik Rose Memorial Badge of Honor for not one, but two successful chair pulls. He got Zach Randolph to travel and turned Marc Gasol to timber with timely withdrawals of crotchal pressure.

- Toney Douglas did what Toney Douglas do for three quarters, then made a horrible mess in the fourth. Through three, he was stupid accurate from the field (7-10) and pretty careful with the ball (just one turnover). In the fourth, he didn't hit a shot and followed an unnecessary offensive foul with a lackadaisical left-handed shovel pass so frighteningly ripe for the picking (and it got picked) that I suddenly found myself under my bed. Not ideal. Though the fourth quarter sucked and we'd like Chauncey Billups back pretty please, Toney put up a hell of a line, including a career-high ten assists, and is worthy of our applause. Shit got scary for a minute, but Douglas had a pretty fine evening on the whole.

- Wanna see something Landry? How about 16 points on 7-8 shooting, including two threes, 6 rebounds and 6 assists? That's pretty goddamn Landry if you ax me. Fields got burned on defense a few times, but he made up for it with perhaps his Landriest outing since the All-Star break.

- Jared Jeffries defended very nicely, though he got bulldozed by bigger Grizzly bears bros a couple times. He blocked two shots, and also covered the floor expertly in instances of zone defense (mostly in the second quarter). Also, I was looking down at the moment, but Jared apparently hit a 20-footer to open the second half. Somewhere in the forest, a baby sparrow tumbled perilously out of its nest.

- This has been said before, but Shawne Williams needn't dribble. Ever. Nice blocks, though, Extra E.

- We know from Zach Randolph's stint in New York that Walt Frazier is an avid proponent of the gooey big man's nickname: "Z-Bo". Clyde referred to him as such after a play in the first quarter, but those of us watching at home were all like, "wait...did he just say 'gazebo'!?". Indeed he did, because Mike Breen immediately called him out for misspeaking. Clyde insisted that he must have his property in St. Croix on his mind, then went on to use the nickname a few more times before the game got too real for such silliness. I wouldn't call that a signature Clyde moment, but it was definitely a moment.

- Also, when Amar'e broke out of a mini slump with a rapid succession of makes, some of which were from impossible angles, Frazier deemed him "hotter than July". THAT's a signature Clyde moment.

- Roger Mason shot 4-7, so that's good. I forgot to play close attention to his defense again, but I did notice that he does a great job of rotating and playing goalie when his teammates double somebody. He snaggled two steals and shut off a few passing lanes with that defensive awareness.

- Someone in the game thread mentioned that Mike Conley bears a resemblance to Toney Douglas, which I can kind of see. It's certainly easier to fathom than what I was thinking, which is that he looks like Eric Earley, the lead singer of Blitzen Trapper. If you're at all down with that, please tell me.

- Breen mentioned that Marc Gasol, in thicker days, used to be called "El Tanque". I've said before that I'd like everybody to call him "El Oso", and I stand by that. At any thickness.

- Tonight's game included no less than three shot clock buzzer-beaters by the Knicks. After a last-second, two-point win, you look back at things like that and get really religious.

- Penny Hardaway was there! MSG interviewed him during the third quarter, and he looks to be in good shape and even better spirits. He mentioned that he's spending his time developing recreation centers in the area and also spoke highly of Knick fans, both of which buttered me right up.

- No Knick turnovers in the third quarter. Did I already mention that? What a weird-ass game.

- Amar'e appeared to turn his ankle and had to sit for a few minutes at the beginning of the fourth, but it didn't seem like anything serious.

- The Sixers lost to the Thunder in overtime. They mean business, but those near-misses in either direction moved the Knicks a game ahead of Philly in the standings. Ballin'.

And that'll be it. Thank you, Carmelo Anthony, for making sure all that excitement didn't go to waste. Tomorrow, it's right back to work on national television against the Mavericks, who are coming off a last-second loss in New Orleans. That could go either way. For now, good night/almost morning. Glad I could share this wild, exclamatory evening with y'all. <3.

Addendum: I couldn't fall asleep because I was overcome with the urge to depict this game's mercurial narrative graphically. I suppose the y-axis could have been "Landriness". Anyway, here: 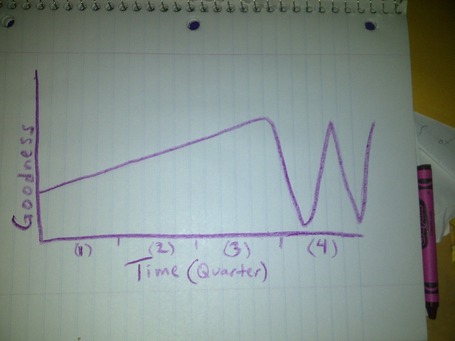