Share All sharing options for: Pre-Game Reconnaissance: Knicks at Mavericks- 3/10/11

We should probably figure out what these "Mavericks" are before the Knicks play them, right?

- The Mavs have won eight of their last ten games, but just one of their last three. This includes a late-game collapse in New Orleans last night. and another close loss to the Grizzlies (remember them?) just a few days prior.

- The last time these two teams met, the Mavericks (who are a pretty average rebounding outfit) absolutely decimated the Knicks on the glass, and made most of their shots to boot. Those were very different Knicks, of course, but these Mavs can blow this one open if the Knicks don't buckle down.

- Still no Chauncey Billups, so Toney Douglas and Anthony Carter will be left to try and outplay the Mavericks' deep and various table of talented guards.

Wassup with the Mavericks!?

From Bryan Gutierrez of Mavs Moneyball:

The Mavericks are hoping to get a split with their brutal stretch of four games in five nights as they take on the New York Knicks. Dallas is on the second night of a back-to-back after playing and losing in New Orleans on Wednesday. The Mavericks are 10-4 on the second night of a back-to-back. Dallas has won 19 of their last 22 games and the three losses came by a combined total of three points. The problem has been that the losses have come due to blowing double-digit leads. After blowing a seven point lead in the last two minutes of the game against New Orleans, Coach Rick Carlisle called the team "soft." They are not soft physically; they are showing signs that they are lacking mental toughness as they take the foot off the pedal when they build a big lead. It will be interesting to see how the Mavericks respond tonight.

Dallas was hoping they were done with Carmelo Anthony on February 11 but that is not the case. As a member of the Denver Nuggets, Anthony scored 42 points on 17-25 shooting in the 121-120 victory over the Mavericks in Denver. The Mavericks will be short-handed at the small forward position as Peja Stojakovic is out due to stiffness in his neck. Shawn Marion’s status is up in the air due getting his ribs injured after a flagrant foul from Marco Belinelli on Wednesday night. If Marion is out, that will leave the Mavericks with Corey Brewer, Brian Cardinal and DeShawn Stevenson as defensive options against Anthony.

One last thing to watch is the amount of minutes that Rodrigue Beaubois plays in the game. Beaubois returned in the middle of February after missing six months due to a broken bone in his foot. The explosive guard shows flashes of athleticism and game-changing abilities. The problem is that with the overall depth of the team, the French guard only gets about 13-15 minutes of action, mainly in the first half of games.

#13 Corey Brewer- During his several days as a member of the Knicks, Corey memorized the heights, weights, birthdays, body mass indexes, phone numbers, and addresses of his teammates, but, alas, not the playbook.

#35 Brian Cardinal- One of Brian's contractual stipulations resulted in his locker being converted into a small "man cave" replete with a 42-inch LCD TV, La-Z-Boy, and queso fountain.

#33 Brendan Haywood- Brendan is a shirtless drunk. You know the type.

#20 Dominique Jones- Dominique's entire mandible can be unhinged and removed for cleaning purposes.

#92 DeShawn Stevenson- DeShawn's neck tattoo of Abraham Lincoln is his only visible presidential ink, but he also has Millard Fillmore on his abdomen, Herbert Hoover on his inner thigh, and Benjamin Harrison on his glans.

#31 Jason Terry- Jason's signature headband hides an intricate and expensive network of wires and receivers embedded in each of his cerebrocortical lobes. The set-up allows Jason to be remotely controlled from Plano by a 13 year-old XBox gamer named Wesley.

Stranger: i search a gay or shemale ??
You: i am a 7-foot frenchman
You: named ian
You: pronounced "yan"
Your conversational partner has disconnected.

Dan: The Mavericks, like our Knicks, are just 24 hours removed from a 48-minute effort and an overnight flight.

Dan: I'm just saying, exhaustion from a maximum effort just last night won't be an excuse for a shoddy performance, even on the Mavs' home court.

Dan: Hell, Dallas lost in pretty heartbreaking fashion last night, and their winning streak has hit a bit of a speed bump of late. It's also their fourth game in five nights. This could be a perfect chance to sneak up on them.

Dan: It'll have everything to do with energy from the outset, I think. Dallas is a good team no matter what, and if the Knicks don't rotate on defense and box out right from tip off, they'll smell blood and take the game, just like they did in New York.

Dan: Ew, what the hell? That just got all over my loafers.

Dan: I told you not to eat all those goddamn herrings before we went swimming.

Oh yes, this man Tyson Chandler. I knew this man in Charlotte, and he kind of creeped me out, dude. I mean, one time we had just played this basketball game against the Pacers or the Packers or whatever, and I went to the locker room to eat my apricots and put on my outside clothes. I do that in my locker, you know, because I don't like everybody to see my genitals or my buttocks or my apricots. Not this man Tyson Chandler, though. I went out of my locker and I looked at this man, and right when I looked at him he just pulled down his sports shorts and right there were his buttocks. It was really creepy dude, and I especially think it was creepy because he is so tall and I could not help but imagine how he has to squat so far to make a poop or if he pees sitting down maybe. Tyson Chandler is a weird guy, dude. I really wish this man did not show me his buttocks. 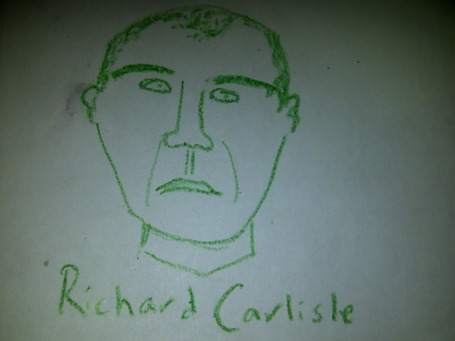 And now you know about the Mavericks. Game thread comin' later.